From Old School RuneScape Wiki
Jump to navigation Jump to search
The RuneScape Wiki also has an article on: rsw:Dagannoth Kings
"Dks" redirects here. For information on the fairy ring code (to Snowy Hunter area), see Fairy ring. However, for the dragon item, see Dragon kiteshield. 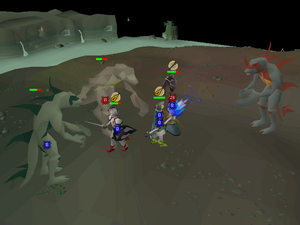 A trio of players take on the mighty Dagannoth Kings.

The Dagannoth Kings (commonly abbreviated DKs) are a group of three dagannoths that live deep in the cave on Waterbirth Island which is a multiway combat area. They are each level 303, and also represent the combat triangle. Each of them uses a different combat style, is weak against the type that defeats them on the combat triangle, and has a high defence against all others. Each King possesses his own unique ring drop, except for Rex who has two. The rings give the best bonuses for their respective styles in the ring slot. All three kings have the ability to drop the dragon axe. Each also drop dagannoth bones.

Killing all three Dagannoth Kings is a requirement for the Elite Fremennik Diary. 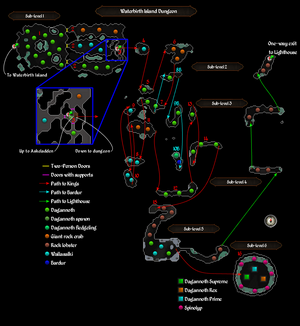 A map of the dungeon.

The journey to the Dagannoth Kings is undoubtedly the hardest part of the trip. There are a few methods to getting to Waterbirth Isle. If there is no mage able to perform the Lunar spell, Group Teleport to Waterbirth, then the team will need to travel by foot. Walking from Camelot, a lyre teleport, or Rellekka house teleport are all viable options. Other alternatives include using a Waterbirth Teleport portal in a POH, using the teleport of the Fremennik Sea Boots, or teleporting to Lunar Isle and walking from there (also possible through a teleport scroll)

From there, it is important to rest at several different points:

It is important in that last area to rest, and use it to restore Hitpoints and Prayer. Typically drinking three doses of a Saradomin brew and one dose of a Super restore and then any boosting potions are helpful. From there, everyone must follow the mage and pray Protect from Magic and run to the ladder at the bottom of the cavern. 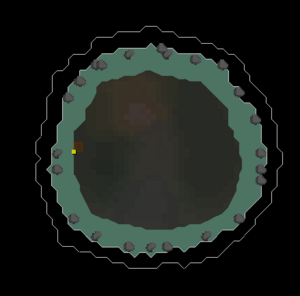 A map of the Dagannoth Kings' lair itself.

There is a separate lair for people who are on a dagannoth slayer task; it can be accessed by right-clicking the Kings' ladder. You don't need a task to go into the Slayer lair; this way, it's possible to pick up your items after a death even if your task is completed. As with all Slayer-only locations, the player cannot attack the Kings there if they aren't on a Slayer task for them.

There are two spots that allow you to check if there are any players in the Dagannoth Kings without entering; the ladder to enter the Kings' lair, and a small enclosure just east of it, accessed by stepping over some roots; dagannoth cannot access this area. The enclosure is a safe area to allow players to safely switch worlds to look for a free world.