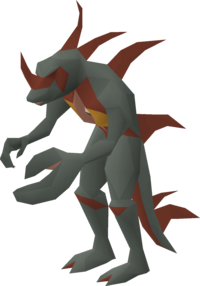 Dagannoth Prime, like the combat triangle suggests, is weak to Ranged attacks. The Zaryte, Armadyl, Dragon hunter, dragon and rune crossbows are effective weapons against him. The Toxic blowpipe is also effective, especially on a Slayer task. Wealthier players may opt to use the Bow of faerdhinen or Twisted bow due to their high accuracy and damage, especially the twisted bow with its effectiveness against monsters with a high Magic level. The Crystal bow is also fairly effective.

His attack is very powerful and more potent than the other two kings; it can deal up to 50 damage in one hit, so Protect from Magic prayer is a must whenever Prime is attacking. The attack is also AoE-based; any other players stood in a 3x3 tile radius around the main target will also be hit. Meleers are advised to stay away from Dagannoth Prime at all costs and fend off Dagannoth Supreme meanwhile, as Prime can kill any player not using the Protect from Magic prayer within a couple of attacks and is resistant to non-Ranged attacks.

The most effective way to kill Prime is to stand in the north-east corner of the lair while not being under attack by the other two kings, staying out of their attack radius.

Drop rates estimated based on 63,560 kills from the Drop Rate Project, unless otherwise cited.

The average Dagannoth Prime kill while on a Konar task is worth 19,845.66.

There is a 7/128 chance of rolling the rare seed drop table.