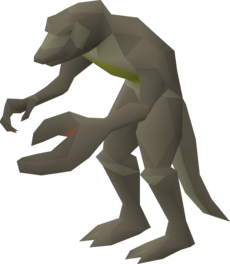 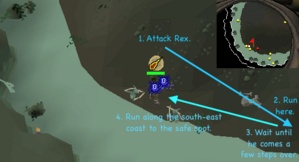 Luring Rex to a safespot.

Dagannoth Rex has an extremely low Magic Defence, so it is recommended to use Magic against him. Popular choices include Slayer Dart, Iban Blast, and powered staves.

Due to his large size and the fact he uses melee attacks only, it is recommended to get him stuck on one of the ridges of the lair and safespot him (note that Spinolyps will still be constantly attacking while you're safespotting). Many players use high-level armour such as Barrows armour, which give high Defence bonuses while still being able to hit Rex constantly with spells due to his very low Magic Defence, even if their magic attack bonus is below zero. Players who use Guthan's are advised heal themselves on the Spinolyps while waiting on respawns to help preserve food and potions.

Drop rates estimated based on 217,761 kills from the Drop Rate Project, unless otherwise cited.

The average Dagannoth Rex kill while on a Konar task is worth 31,925.1.