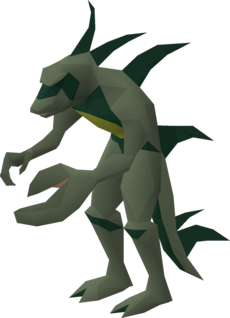 His Ranged attack sounds like the Water Wave spell when hitting players and, in a similar fashion to Magic attacks, will "splash" if it misses.

Dagannoth Supreme is most weak to melee attacks. The best weapons to use primarily are the abyssal whip or tentacle due to its high Strength bonus and fast attack rate, the Saradomin godsword for its special attack, accuracy, and Strength bonus, and Guthan's warspear, which should only be used in conjunction with the full Barrows set to heal. If a player does not possess a Saradomin godsword, a Crystal halberd or Dragon dagger is a good alternative special attack weapon.

Drop rates estimated based on 64,276 kills from the Drop Rate Project, unless otherwise cited.

The average Dagannoth Supreme kill is worth 45,178.

The average Dagannoth Supreme kill while on a Konar task is worth 47,061.8.

There is a 7/128 chance of rolling the rare seed drop table.