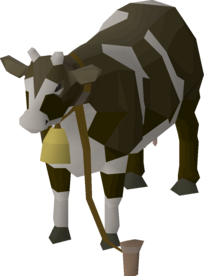 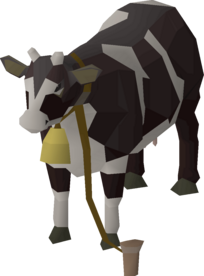 A dairy cow is a cow that the player can milk with an empty bucket in their inventory to receive a bucket of milk. For more information, Gillie Groats by the northern Lumbridge cow pen will explain more about milking. Dairy cows were introduced because players could attack and kill a cow whilst another player was milking it, preventing them from receiving milk.

Unlike the other cows, dairy cows cannot be attacked or killed. A dairy cow does "talk" to the player during the quest Cold War. During and after completing Cold War, players can steal cowbells from them.