From Old School RuneScape Wiki
Jump to navigation Jump to search
Loading...
VampyreSins of the Father

Damien Leucurte is a vampyre who can be found in the upper floor of the Crombwick Manor in the town of Slepe. He appears to have forcefully taken control of the manor over Lord Crombwick, and is staring intensely at a painting.

Although he appears human, he is strongly implied to be a vampyre, as he addresses the player as "bloodbag" when players speak to Lord Crombwick, and sharp fangs can be seen on his face.

He is a minor antagonist of the Sins of the Father quest, where it is revealed that he is indeed a vampyre and a lesser noble of Darkmeyer. He is revealed to be responsible for the Sleeper Plague infecting the residents of Slepe, having tasked Kroy to replicate the original plague, as he sought to meet the increased vampyric demand for blood, as plague-stricken humans produced more blood. This caught the attention of Vanstrom Klause, who was impressed with the solution but disapproved of it, leaving Damien to deal with the situation himself, as it brought "unnecessary" attention. Following Kroy's death at the hands of the adventurer, Damien was forced to enlist several werewolves to capture humans across the Salve. He is later killed by the adventurer and Veliaf Hurtz in order to use his noble vampyric blood to finish up their vyre noble disguise. 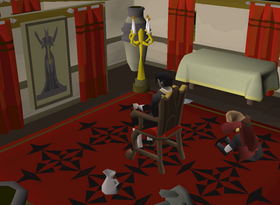 Damien staring intensely at a painting, with Lord Crombwick cowering behind him.