Damis is one of the four guardians of the Diamonds of Azzanadra, fought only when doing the Desert Treasure quest. He is the only guardian who exclusively uses melee to attack, however this is made up by him having two forms, with the second form being able to attack at a quick rate as well as draining Prayer rapidly. As with most monsters in the Shadow Dungeon, Damis allows other monsters to pass through him.

He is found at the end of the Shadow Dungeon, which is accessed via a ladder requiring the ring of visibility to see. When approaching Damis' location, the player will be told in their chatbox that they hear a voice from the walls telling them to turn back. 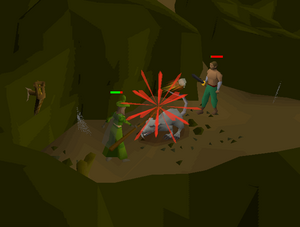 A player using a giant rat to safespot Damis.

His first form is not much of a threat as the player can use Protect from Melee to defeat him and mitigate all damage, however his second form has higher stats, attacks faster and drains the player's Prayer rapidly when close up. As such, it may not be a good idea to allow Damis to attack the player.

The best method to defeat Damis is to get the attention of (but not kill) the bat or one of two giant rats found nearby and luring Damis and the other aggressive monsters behind it. Unlike the skeletons and Shadow Hounds, they will prevent other monsters passing through them. The player can then safely attack Damis using Magic/Ranged with only the giant rat or bat attacking the player. An alternative strategy is to fill your inventory with prayer potions and spam them, as that is the only viable method if you are low level.

As Damis is weak to Magic, Iban Blast and Trident of the seas/swamp are effective. He is resistant to melee and Ranged. Contrary to a popular misconception, Damis is not specifically weak to Earth spells.[1]

During Damis' second form, he may say one of the following quotes per game tick when he is close up to the player: