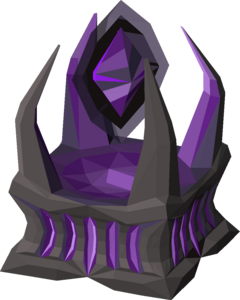 Using dark essence blocks on the altar will reduce prayer points by 1 per block and 2.5 Runecraft experience is gained per block.

Reanimation spells may be cast on ensouled heads near the Dark Altar, regardless of where the monster was originally killed, to reanimate a monster which can then be killed for Prayer experience and Arceuus favour. In addition, various Slayer and boss trophy heads, such as cockatrice heads and abyssal demon heads, can be sacrificed to the Dark Altar, granting an instant 2,500 Prayer experience (1,000 for Vorkath's head); this does not require or grant any favour.

The Dark Altar's origins and age are unknown, yet it has been studied by the inhabitants of Arceuus for as long as their documented history. The Dark Altar's power is near-limitless, and the full extent of its power remains largely unknown, even by those who have studied it extensively.

According to Amon Ducot, the author of the transvergence theory, it has the ability to bring life out of death when reanimating corpses, corrupt individuals and break minds. In addition, its power allows it to bridge the gap between life and death, sanity and insanity, as well as converging the dimensions needed to craft runes.

It is known that its power created the blood and soul altar located near it by drawing energy from the planes where the real altars are located[1]. This power enables the souls of Great Kourend's dead to be transported to the River of Souls, where they are brought to the afterlife[2].

Although not visible in-game, it is known that texts of an ancient language are inscribed on the Dark Altar, which contains a recurring symbol that translates to sacrifice[3], although it may also be interpreted as death[4].