The Fragment of Seren was an entity whom Lord Iorwerth tried to summon to Gielinor and is fought as the final boss of the Song of the Elves quest. She was referred to as the Dark Lord by the Iorwerth Clan in order to trick King Lathas into believing they were summoning Zamorak, whom he worshipped in secret.

After the quest, players can fight the Fragment of Seren again through the memoriam device in the Tower of Voices. Unlike during the quest, deaths here are considered safe.

The Dark Lord was a being created by Seren, when she poured her negative influences into a proxy infused with death magic to counteract the bond she had unintentionally bound her elves with in order to share some of her immortality with them. The entity immediately attacked Seren, but she defeated it and she realized that the only way to remove the curse would be gradually over time. When the end of the God Wars came, and Seren was asked to leave Gielinor by Guthix, she sealed the fragment away within the Temple of Light and left the knowledge of this fragment and her past mistakes in Prifddinas' Grand Library, so that the elves would at some point learn the truth about this fragment and to figure out whether they wanted to cleanse it or destroy it. From within the temple, the fragment began whispering to people in the Underground Pass, driving them mad and leading many to their deaths.

At some point during the Fourth Age, Lord Iorwerth found out about the fragment after breaking the Seal of the Forgotten within the Grand Library, but misunderstood the message that Seren left behind, believing that the fragment of Seren was the goddess herself in a trapped form and began searching for a way to free it and worked with King Lathas in an attempt to free it from the Temple of Light. Lathas told an adventurer that his brother, King Tyras, was forced to drink from the Chalice of Eternity by the Dark Lord, corrupting him in the process, but this was a lie.

Iorwerth established the Prifddinas Death Guard and had it set up base in West Ardougne under the cover that a plague had infected the city. He then began using the quarantined citizens as slaves to dig into the Temple of Light to free the Dark Lord and use its power to restore Prifddinas without the aid of the other clans, leaving the Iorwerth clan as the sole ruler of the city. The Iorwerth elves were close to gaining access to the Temple of Light as part of summoning the Dark Lord, but the plan was foiled, when an adventurer with help from the rebel elves of Lletya managed to get the temple's security system working again.

Despite the setback, Lord Iorwerth knew that he would be able to access the temple regardless in the foreseeable future once the safeguards failed again. In preparation for this, he acquired the two orbs which served as the final key to freeing the Dark Lord from her prison. After re-acquiring the orbs that were stolen from him by the adventurer, he learned of a backdoor into the Temple of Light from a dwarvern encampment in the Underground Pass and attacked it with his forces. Though many of his warriors, including Essylt, were slain, Lord Iorwerth managed to enter the temple, found the Dark Lord and freed her from her prison.

The fragment was enraged after thousands of years of imprisonment, noticed the adventurer as a non-elf and dragged them to her realm, mistaking them as one of Seren's servants sent to kill her. Though the Dark Lord had numerous powers at her disposal, she was eventually defeated. Lord Iorwerth claimed that even though she was angry, she was innocent, hurt and confused.

She has an attack that is guaranteed to hit close to the players maximum Hitpoints so using Saradomin brews or anglerfish to heal above the current max is recommended. Wearing a full set of justiciar armour to reduce the damage taken is a viable option as well.

Protect from Missiles is recommended to reduce her auto-attack damage (which caps out at 12-12) to non-threatening amounts (3-3 damage).

All damage towards her is capped at 24; if players would have dealt over 24 damage to her, it is reduced to 22-24 damage. She is immune to all forms of recoil, including Vengeance.

Due to her low magic defence in comparison to other defensive stats, using Magic damage is recommended for fighting the Fragment. Because Saradomin brews will reduce your magic level until a super restore is used, using the Powered staves like the trident of the swamp or trident of the seas is recommended so that you are able to continue attacking even when your magic level is temporarily reduced.

The Fragment of Seren has 2 standard attacks: 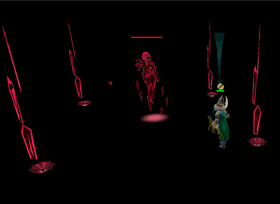 A player fights the Fragment of Seren.

During the encounter she will cycle between multiple special attacks in this order. Each special attack is separated by about 15 seconds (usually enough time for her to do 3 normal attacks). She always announces a special attack by saying some text.

As the fight progresses the Fragment's special attacks will increase in power. Only the first attack is unaffected by this.

The equipment should focus on magical accuracy and strength, as defence has little effect on the Fragment's attacks.

Depending on strategy, a player may wish to bring a weapon switch (i.e. Toxic Blowpipe), an emergency teleport, a rune pouch and/or stacks of runes. The rest of the inventory should be filled with Super restores and Saradomin brews in a ratio of 1:3.

Be wary you may need to drink Saradomin brew/super restore potion during other phases of the fight.

Should the player die, their equipment can be reobtained from the Rebel Scout in the Underground Pass for a fee of 80,000 coins, provided they DO NOT die elsewhere.

Ironmen are strongly recommended to have access to either Saradomin brews or anglerfish. If neither of these are available, the fight is considerably more difficult, especially for players with high hitpoints, as the fragment's special will always deal near the player's max hp. Players without these will find it hard to last long enough to kill the boss before running out of supplies. Ironmen without access to these are recommended to use the highest healing food available and to use blood spells such as Blood Blitz or Blood Barrage to save on food.

Inventory (if brews are unavailable):

Note that it is not necessary to use a dart or bow switch for the pillars if using blood spells as despite not dealing damage, it is possible to heal from them (around 5-6 despite them having 1 hp) to save more food.

Another tactic for ironmen without access to brews/anglerfish is to use Redemption every time she uses her special attack to damage 95% to 98% of the player's Hitpoints. Heal to full before the special attack comes. Use 1 prayer dose per cycle with 70 Prayer.