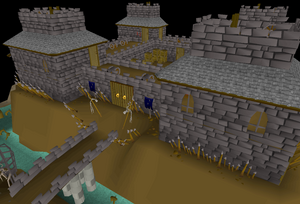 The Dark Warriors' Fortress is a castle in level 14 to 16 multi-combat Wilderness, north of Falador. It is populated with level 8 and 145 dark warriors. Caution should be used as these warriors can overwhelm lower level players who don't use Protect from Melee.

This floor has several rooms, and is crowded with dark warriors. The northernmost room contains respawns of 5 Earth, Water, Air and Fire runes. The room directly west of this contains 5 Chaos, Mind and Body runes. Players should be wary when approaching this area: Although this a good place for a rune spawn, player killers may attack and very possibly kill other players who are around their combat level. In the centre of this floor is a courtyard containing, amongst other things, a crate which players are sometimes led to when completing hard Treasure Trails.

You can achieve tolerance with the dark warriors after 10 minutes whether you fight with them or not.

In the room with the 5 Chaos, Mind and Body runes, if you position yourself correctly using the broken ladder, you can be safe from the dark warrior inside the room.

This floor is the top level of the castle walls. It contains nothing of interest beyond more dark warriors. Players looking to collect rune spawns on the ground floor can climb up the ladder in the south-western room and climb down the broken ladder in the north-western room in order to save a little bit of time coming in, since there's a wall blocking access to the Chaos runes from the entrance that would otherwise require walking all the way around the castle. The broken ladder does not allow access from the chaos rune spawn room to the upper floor. It is only a one way ladder and may only be climbed from above.

A spectacular, if grim, view from the spires of the castle. Nothing of interest is found up here.