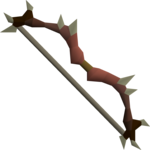 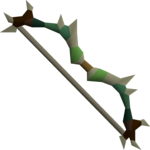 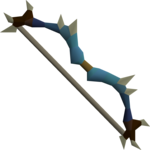 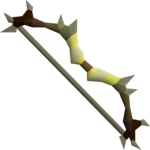 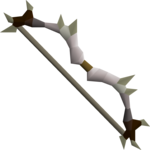 The dark bow is a two-handed ranged weapon that requires level 60 in Ranged to wield. It can only be obtained as a drop from dark beasts and their superior variant, night beasts. With an attack speed of 9 (5.4 seconds), and 8 on rapid (4.8 seconds), this bow stands out as the slowest weapon in the game. It fires two arrows per attack which roll independent accuracy checks.[1] It has the maximum possible attack range of 10, so the longrange attack style will not increase its attack range.

Assuming that both weapons are set to the rapid attack style, the dark bow has a firing time of 2.4 seconds per arrow, whereas a shortbow such as the magic shortbow (i) takes only 1.8. Because of this, the dark bow is only fairly popular for player killing. It has one of the highest max hits of any weapons in the game by means of special attack, along with the crystal halberd and dragon dagger, although the twisted bow and Dharok's greataxe can hit harder with regular attacks, and the dragon 2h sword is able to deal more total damage with its special attack. 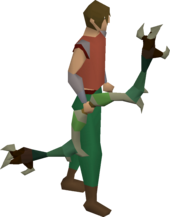 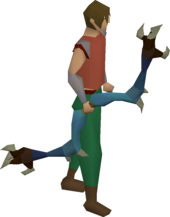 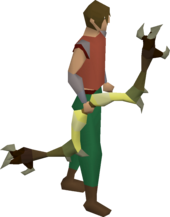 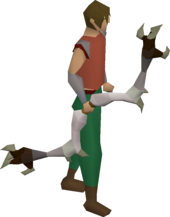 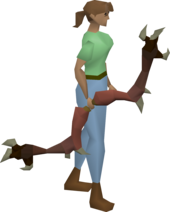 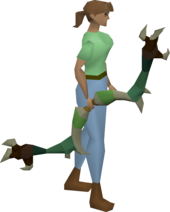 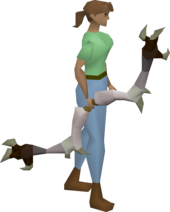 A player performing one of the dark bow's special attacks, Descent of Dragons.

The 1st special attack, Descent of Darkness, deals up to 30% more damage with a minimum of 5 damage per arrow. The animation shows two arrows fired at the target, surrounded in a black shroud.

If the player has dragon arrows equipped, the 2nd special attack, Descent of Dragons, is used instead. This attack deals up to 50% more damage with a minimum of 8 damage per arrow, while capping the max hit at 48 damage per arrow.[2] However this minimum damage is still affected by damage multipliers on some monsters, for example the damage is lowered to a minimum of 2 damage per arrow on Ice Demon or a minimum (and maximum) of 0 damage per arrows on a Guardian in Chambers of Xeric. The animation shows two black dragon heads fired at the target.

Players can use dark bow paint, purchased from the Last Man Standing shop for 25 points, to recolour a dark bow. This process makes the bow untradeable. To remove the colouring and make it tradeable again, players must use a cleaning cloth on the bow to return to its regular state (the paint will be lost).