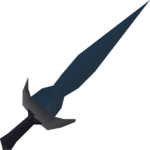 The dark dagger is a quest item obtained during Legends' Quest. It is given to the player by the entity Echned Zekin. The dagger can then either be given to Ugandulu for a one-use Holy force spell, or used to kill Viyeldi which converts the dagger into a glowing dagger. It is then given to Echned, who turns out to be the demon.

If players have misplaced their glowing dagger after the quest, it can be reclaimed from Radimus Erkle, and can be investigated via-right click afterwards to switch its appearance between a dark or glowing dagger.

It has the same stats as an iron dagger albeit without a strength bonus.