From Old School RuneScape Wiki
Jump to navigation Jump to search
This article is about Chambers of Xeric reward. For relics in the Twisted League, see Twisted League#Relics. 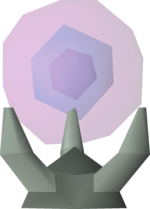 The dark relic is a possible reward from the Chambers of Xeric. It has a Commune option which will result in the chat box stating A dark power emanates from the relic. You sense that this power can be directed.

Upon communing with the relic, the player may choose a skill in which to receive experience. If the chosen skill is one of the skills used in the Chambers of Xeric – combat skills, Mining, Woodcutting, Herblore, Farming, Hunter, Cooking, Fishing, Thieving, Firemaking or Agility – the player will receive 150 times their level in that skill as experience. If the chosen skill is not on this list, the player will instead only receive 50 times the corresponding skill level as experience. Construction is not included in the list of skills that receive an additional experience bonus, despite it being used to build storage units.