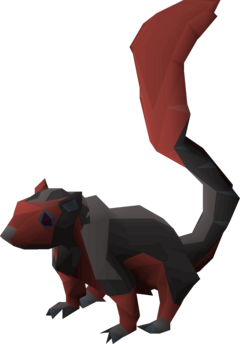 The dark squirrel is a pet who can be obtained by using a dark acorn, which is purchased from the Hallowed Sepulchre for 3,000 hallowed marks, on a giant squirrel, where players can then right-click "Metamorphosis" to change between the giant and dark squirrel as they so please.

The following text is transcluded from Transcript:Giant squirrel.
Standard dialogue

A random dialogue will be selected every time the giant squirrel is spoken to:

This dialogue is only triggered when the giant squirrel is roaming in the player-owned house and interacts with a scratching post built in the Menagerie.

This dialogue is only triggered when the giant squirrel is battling another pet in the arena in the Menagerie.