Darkmeyer is the capital city of Morytania located in the Sanguinesti region, north of Meiyerditch. It is inhabited by vampyres and ruled by Lowerniel Drakan, his sister Vanescula Drakan and brother Ranis Drakan. Darkmeyer and Meiyerditch appear to be twin cities, with Darkmeyer making up the northern half of the region and Meiyerditch the southern half. The vampyric inhabitants get most of their blood from blood tithes conducted in the rundown neighbouring ghetto Meiyerditch. 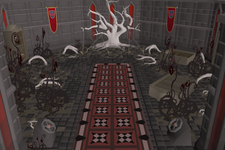 The everlasting bane of the vampyres.

The city was founded and ruled by Lowerniel Drakan after his successful invasion of Hallowvale.[1] Before he completely took over Hallowvale, Queen Efaritay, who was also a renowned botanist, bred all kinds of plant life to use against the vampyres, one of which was the Blisterwood Tree found in the heart of the city.[2] Unable to destroy the tree, the vampyres sealed it within Efaritay's old Arboretum, with the Drakans ordering that no one is to enter the building.[3] During this time, the Archpriest of the Unicorn and his followers also began to create safeguards for the Hallowed Sepulchre[4] to prevent the vampyres from gaining access to the secrets and treasure within.[5]

At some point Lowerniel Drakan departed, leaving the ruling of Darkmeyer and the Sanguinesti region to his siblings, Vanescula and Ranis Drakan. In recent times, the vampyres are now facing a blood shortage crisis due to overpopulation,[6] forcing them to seek alternative methods to obtaining blood, such as having werewolves attempt to cross the River Salve to kidnap humans, and Damien Leucurte causing the Sleeper Plague upon the citizens of Slepe to tithe more blood from them.

Lowerniel Drakan is already aware of his sister's betrayal.

This crisis, along with Lowerniel's continued absence, causes Vanescula Drakan to turn against her brother.[7] She soon crafts plot to overthrow him by proposing an alliance with The Myreque, the resistance group attempting to liberate Morytania. Providing them with the means to infiltrate Darkmeyer and access the Blisterwood Tree to make weapons to use against Lowerniel, she brings them to Castle Drakan under the pretense that she was bringing them in as prisoners. However, Lowerniel easily sees through her sister's lies,[8] killing her servants and subduing her, alongside killing half of the remaining Myreque members.

The city itself is comparable to cities such as Falador in terms of size. Like many of Gielinor's cities, it is built in a mostly uniform style, with many of its buildings being built of grey stone, with gothic motifs common in their designs. It has within its walls one of Morytania's two altars, as well as a bank and furnace.

The city itself is divided into three parts: 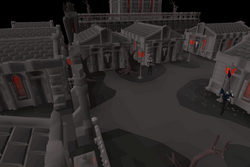 The lower tier of Darkmeyer.

The lower tier is inhabited by the Vampyre juvinates and the Vyrewatch who patrol the tier. The Juvinates are not allowed to enter the upper tiers, with the exception of bankers.

The lower tier features the following: 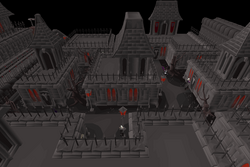 The middle tier of Darkmeyer.

The middle tier is inhabited by the more respected vampyres, with Vyrewatch Sentinels patrolling throughout the middle tier.

The middle tier features the following: 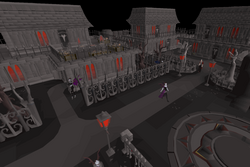 The upper tier of Darkmeyer.

The upper tier is inhabited only by the most high-ranking vampyres, with Vyrewatch Sentinels patrolling throughout the upper tier.

The upper tier features the following:

It was revealed at Runefest 2019 that Darkmeyer will be accessible after completion of the quest Sins of the Father.