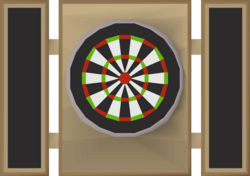 A dartboard can be built in the Ranging game space of the Games room in a player-owned house. It requires 54 Construction to build and when built, it gives 290 experience. The player must have a hammer and a saw in their inventory to build it.

Players use their Ranged skill to throw darts at the dartboard, gaining points. Whoever has the highest score after throwing ten darts is the winner. Players will need to supply their own darts, as the dartboard will not supply them.

Managing to hit the board will reward the player with 7.5xp in Ranged.