Deadman: Reborn is an updated variant of Old School RuneScape's Deadman Mode, released on 25 August 2021 and is operating through 16 September 2021. In this variant, players receive accelerated experience rates, increased drop rates of rare items, and most of Gielinor being PvP areas. Many other small differences exist between Deadman: Reborn and the standard game, which are detailed below.

All existing RuneScape rules apply to Deadman: Reborn, as well as the following additional rules, which can be reported by players.

Anyone found to be abusing game mechanics to gain an advantage in a way considered by Jagex staff to be unsporting will be removed from Deadman: Reborn immediately. Anyone caught cheating in any Jagex event may be suspended from all future Jagex events. Jagex staff will review cases and players.

For the first round of 1v1s, all players will have full access to their banks. They can also change attuned sigils, as if they were in a safe zone during the main Deadman: Reborn event. Once the first round begins, banking will no longer be possible.

Winners of fights will have all health, stats, and special attack restored. Any food or potions in their inventory at the end of the fight will be deleted, and replaced with the following list of supplies (excess supplies dropping to the ground):

Like other Deadman modes, Deadman: Reborn has unique mechanics.

Deadman: Reborn operates on its own servers, accessible through any Old School RuneScape client. These worlds are clearly marked as separate and distinct from the standard game.

Progress on a Deadman: Reborn profile of a player's account does not affect the player's main profile. In other words, regardless of what levels, equipment, or completions a player has achieved on the main game, all players begin at level 3 in Deadman: Reborn.

The following worlds are classified as servers for Deadman: Reborn:

Each day, a player can claim one starter pack from the combat tutors in Lumbridge. This limit resets upon losing their final life.

These starter packs are untradeable and cannot be used in PvP. Each pack includes the following:

Players are under protection from PvP for 15 minutes after leaving Tutorial Island. When a player advances to a new combat bracket, the player has 60 minutes of PvP protection.

When a player respawns after losing their last life, the player has 15 minutes of PvP protection.

A player can remove this protection at any time by speaking to the Doomsayer in Lumbridge.

Most of Gielinor in Deadman: Reborn is PvP enabled. Players cannot attack other players if they are standing within designated safe zones, but can still be attacked by players standing outside these zones (be careful around the edges!).

These zones have the PvP flag disabled entirely:

If a player enters a guarded zone while skulled, the player will be attacked by level 1337 guards, who will attack with ranged every game cycle, with its damage starting at 1/5th of the player's max hitpoints, increasing by 2 damage with each attack.

A 'PJ' timer of 16 game cycles will be running on all Deadman: Reborn worlds, affording a player a grace period where the player cannot be attacked by another player while fresh from an encounter. Anti-boxing measures will prevent players abusing this feature, and boxing will be against the rules in Deadman: Reborn. 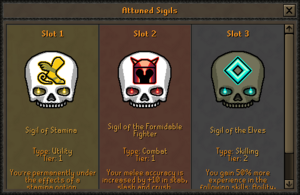 A sneakpeek of the 3 out of 53 Sigils available to use.

Sigils are useful power-ups similar to the relics of Trailblazer League. They provide XP boosts, speed increases, stamina boosts, and other benefits.

Sigils come in three tiers. When a player starts Deadman: Reborn for the first time and again any time a player lose all three lives, they will be presented with a selection Tier 2 sigils. The selection is the same each time for all players, but this allows the player to attempt different strategies as Deadman progresses.

Sigils can be obtained as drops from NPCs and monsters as part of the Deadman-only drop table (see below), and can be traded via the Grand Exchange (they cannot be traded directly from player to player).

There will be 53 Sigils available within Deadman: Reborn.

As usual, a player dies when their account is reduced to 0 hp. Unlike normal, each player starts their adventure with 3 lives.

Upon dying in PvM or other non-PvP combat, the player's life count is not affected. Players can reclaim their lost items from Death’s Office as normal.

Upon dying in PvP combat, the player who died loses a life. The died player loses all their worn and carried items (even if they have the Protect Item prayer activated), and drop a bank key (see Economy, below).

If a player loses their last life in PvP combat, there are additional consequences.

If a player dies in PvP with an untradeable item equipped or carried, it functions as if a player had died below level 20 Wilderness to another player in the main game. It may break, be sent to Death’s Office, be destroyed, or otherwise function as it normally would, depending on the item. The killer receives coins equal to its in-game value.

Players cannot teleport or log out for 11 game cycles (6.6 seconds) after leaving combat with an NPC outside a safe zone, even if the player defeated it. This restriction does not apply to combat with NPCs within safe zones.

Players cannot teleport or log out for 12 game cycles (7.2 seconds) after leaving combat with another player.

Depending on a player's Deadman: Reborn profile’s combat level, the player can only access certain worlds.

There are separate bracket worlds for levels 3-35, 36-70, 71-100, and 101-126. Having too high or low of a combat level will prevent a player from joining a world, so a player will only be able to play on a world they have the correct combat level for.

The Grand Exchange functions across all brackets, but a player can only trade directly with other players in the same bracket as them.

If a player increases to another level bracket while on an earlier world (e.g. leveling from 35 combat to 36), the following conditions apply to the player until they switch worlds:

Players receive a 10x experience rate for all non-combat skills in Deadman: Reborn. Players also receive increased XP rate for combat skills based on which combat bracket they are in.

Players do not receive combat XP from PvP, but fake XP drops will appear to indicate how much a player would have gained.

While a player is alive, banking works as normal. Players also have a safe deposit box, which can store 10 individual items (not stacks of items; 10 coins counts as all 10 items).

When a player is killed by a monster, nothing happens to the player's bank.

When a player dies to another player and do not have lives remaining, the player lose the top 28 most valuable stacks of items from their bank and safe deposit box.

When a player dies in PvP, they drop a bank key. The killer can pick up this bank key and, after their skulling has ended, claim the top 28 most valuable stacks of items.

Deadman: Reborn has a functioning Grand Exchange. Its buying, selling, and pricing function independently of the standard game’s GE.

All range shops will sell the bone crossbow and bone bolts.

The following restock at faster rates:

Located just north of the Edgeville bank, the Emblem Trader operates the Emblem Store (formerly known as the bounty hunter shop). This shop takes Emblem Points as currency, which are obtained by giving archaic emblems to the Emblem Trader.

Players can trade in emblems to the trader by talking to him (not by opening up the store menu). Players do not need to bring emblems with them in their inventory; the trader can pull them directly from the player's bank.

Archaic emblems are obtained as infrequent drops from any NPC or monster.

In earlier versions of Old School RuneScape, players could also obtain emblems through the Bounty Hunter minigame. This minigame is disabled in both the standard game and Deadman: Reborn.

The Emblem Store has the following stock:

Due to Edgeville being a PvP area, trading with the Emblem Trader may be unsafe with associated risks of being attacked by another player. Blighted items can be used anywhere in Gielinor during Deadman: Reborn, not just in the wilderness.

As Trouver parchments are unavailable in Deadman: Reborn, consequentially the rune pouch is always lost on death.

The following items are dropped four times as frequently in Deadman: Reborn as they are in the standard game:

Other drop rate changes include:

In addition to any loot an NPC or monster would normally drop, there’s a small chance it will also drop an item from the Deadman-only drop table. This table includes:

The following gameplay is not available to players in Deadman: Reborn. This means that some unique equipment, such as the [elite] void knight outfit, are also not available. Achievement diary tasks that require participating in an unavailable minigame are adjusted accordingly.

It is unclear whether the following content (unavailable on Permanent Deadman Mode) will be enabled in Deadman: Reborn.

It is unclear how functional the following content (partially enabled on Permanent Deadman Mode) will be in Deadman: Reborn.

Deadman: Reborn will run for roughly 3 weeks. At the end, the top 2,048 players will be invited to participate in 1v1s, a series of paired PvP matches. The winner of each fight moves on to the next round.

The final 16 players will receive prizes, as follows:

If a player experiences connectivity issues and logs out before a Finale fight begins, that player has only until the fight begins to log back in, or else face disqualification.

Should credible evidence emerge to suggest an account is maliciously targeting other players, Jagex will take appropriate action against them.

Jagex will not restart the Finale under any circumstances.

Finale results can be expected to be announced the night of the Finale. If evidence emerges that elicits investigation, results will be delayed until after the Old School team has met and reviewed all evidence available to them.