From Old School RuneScape Wiki
Jump to navigation Jump to search
This article is about the old Deadman events. For the other event, see Deadman: Reborn. 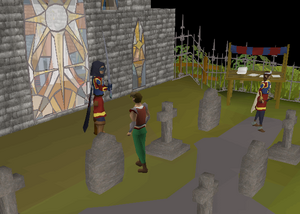 A player in Deadman Mode.

Deadman Mode (commonly abbreviated as DMM) is a variant of Old School RuneScape that released on 29 October 2015. A separate server is hosted featuring an open PvP environment, with some exceptions. Players in-game can speak to Nigel in Lumbridge graveyard for information about Deadman Mode.

Experience gained in Deadman mode is 5x more than usual; however, experience that is gained from quests will not be multiplied. In addition, experience will not be gained in most instanced areas (such as the Nightmare Zone and TzHaar Fight Caves).

Every player begins their adventure at combat level 3, and progress in Old School RuneScape, or any other game (RuneScape 3, RuneScape Classic, etc.), will not be affected. All content is only available to members.

Upon killing a player, they may receive blood money. One is received per kill, and can be used to purchase Deadman armour from Nigel in the Lumbridge graveyard. It has the same bonuses as iron armour. A total of three are required to purchase the Deadman's chest, Deadman's legs, and Deadman's cape. These can be reclaimed for free should a player die. 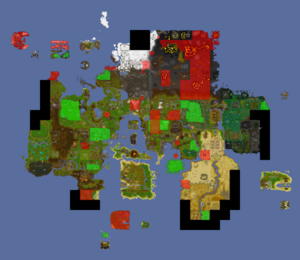 A map showing the safe and multicombat zones in Deadman Mode

The following worlds are classified as servers for permanent Deadman mode:

Every few months, Jagex opens a brand new Deadman Seasonal server, in which the top 2,000 players will become eligible to participate in the Deadman Invitational.

The Invitational server is yet another brand new server in which every player starts over from the beginning, and have less than a week to build their accounts up to the final hour of the Invitational, in which a deadly fog spreads over the area, and the safe zone is broadcasted in game, forcing remaining players to a confined area to fight it out.

The final survivor then wins a $20,000 cash prize, and a brand new deadman season begins when announced. The list of dates and seasons can be found below:

An updated variant of Deadman Mode labelled as Deadman: Reborn available from 25 August 2021, with the biggest change introduced to it being Sigils, acting similarly to relics from the Trailblazer League, combat level seperated worlds and experience rates modifiers.

The following minigames and their reward shops (if any) are not available to players in deadman mode. This means that some unique equipment, such as the [Elite] Void Knight outfit, are also not available. Achievement diary tasks that require participating in a disabled minigame have been adjusted accordingly.

This content is still accessible, but gives reduced or no experience points. Players may still receive other benefits, such as minigame reward points.

Players receive 5x experience points from typical skilling activities and some minigames. This multiplier does not extend to quest rewards, XP lamps, or some minigame rewards.

On seasonal deadman mode servers, players will instead receive a 20x boost during their first 30 minutes of in-game time, and 10x for the first 6 hours.

On permanent deadman mode servers, players will instead receive a 10-20x boost to skills for their first 12 hours of in-game time. The boost multiplier depends on the skill's level at the time of receiving the experience points; 20x for level 1 skills, and slowly decreasing to 10x at level 50 and beyond. The exact formula is currently unknown.

Players will lose experience points in select skills upon death if the player is skulled. See the "Death" section below for more information.

Players will not receive experience points in most instanced areas. This includes instanced boss fights, the Nightmare Zone, and the Tzhaar Fight Cave. Exceptions include player-owned houses (construction and prayer experience only) and Tempoross.

The drop rate for some rare items is increased for deadman mode, such as the draconic visage.

On permanent deadman mode servers, players cannot attack nor be attacked by other players for the first 12 hours of in-game time.

Some towns and villages are "safe" zones. Players cannot attack other players within the area. However, players who are standing outside of a safe zone are still able to attack players if they are within range of their attacks, whether or not they are standing in a safe zone.

Any player who enters these safe zones when skulled will be attacked on sight by level 1337 guards. These guards can hit in the high 40s through prayer and are able to cast Ice Barrage and Tele Block. In addition, players frozen by guards cannot pick up or telegrab items.

Tutorial Island and the Barbarian Assault minigame area are the only areas in Deadman mode where players are unable to attack others. Safe zones include:

The skulls that appear on a player's head, indicating the amount of bank keys in their possession.

In Deadman mode, being skulled will cause level 1337 guards in low-threat areas to cast Ice Barrage, Tele Block, and attack you, being able to hit through prayer, and are unable to pick up or telegrab items while frozen.

In addition, if players are in possession of bank keys, the skull will indicate the amount of keys that are in a player's possession. Players who attack other players with a skull will not become skulled themselves.

A skull will last for fifteen minutes, but will not deplete while in an instanced area or when standing in the same place for an extended period of time. The game HUD will have a timer, updating every half minute, to notify skulled players how long they will stay skulled.

Players who obtain a skull will have it last for fifteen minutes, and for every unskulled player they attack, two minutes will be added to the skull timer. However, attacking another player whose combat level is 30 levels lower will result in the timer increasing to 30 minutes.

Dying in Deadman mode varies, depending on how the player died. If killed by another player, 10 of the most valuable items will be taken by the killer in the form of a bank key, in addition to any items that were in the victim's inventory.

When a skulled player is killed by an NPC, the 10 most valuable stack of items from their bank are dropped on the floor instead. These items will appear instantly to everyone. In addition, untradeable items (such as Void Knight equipment or a fire cape) will convert to coins upon death.

However, if a player dies to an NPC without being skulled, it acts as a normal death akin to that of Old School RuneScape. 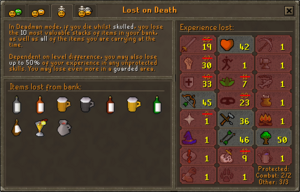 A player selecting which skills to preserve when they die.

Completed quests and Achievement Diaries will retain completion upon death. Players who lose certain levels may also be unable to access certain post-quest content. For example, if Monkey Madness I is completed, and lose the Defence experience upon death, players will be unable to travel to Ape Atoll without the proper stats. However, a dragon scimitar can still be equipped, providing the player has an Attack level of 60.

Players who die to players will lose experience in accordance to the combat level differences. The exact formula is: 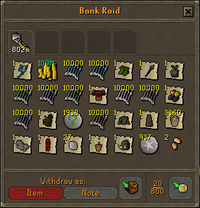 A player taking items from another players bank.

Players who are killed by another player or killed by an NPC while skulled will drop a bank key, in which 10 of the most valuable items, based on Grand Exchange value, are removed from your bank. The key will automatically appear in the inventory of the PKer, if they have the space for it.

The player that obtained the key can collect the items by opening a chest in a bank within a low-threat area, which means they must wait until their skull expires or risk being killed by the guards. These bank keys cannot be deposited into a bank, and only five bank keys can be in a player's possession at any given time. Bank keys look identical once in the inventory and cannot be examined to discover who dropped them. Once obtained, they cannot be dropped, only destroyed. 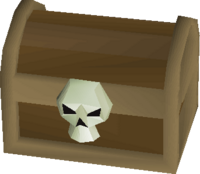 If a player kills a player who is in possession of another bank key, they will drop their own bank key in addition to their victim's bank keys, with higher valued keys taking priority. If a skulled player dies to a guard, 10 of their most valuable items from the bank are dropped wherever they die. However, if a player does not have enough inventory space to receive a key, it will be dropped to the floor. This will only happen until the limit of 5 keys is reached. Both keys in a player's inventory and on the floor count towards this limit.

As stated earlier, skulled players will be attacked by level 1337 guards if they entered a protected zone. Getting killed by these guards will lead to a 10 percent loss of experience in protected skills, in addition to the regular penalties.

Players can insure up to ten items (ten single items, not 10 stacks of items) by speaking to the Financial Wizard and depositing the items in the safe deposit box. Items in the safe deposit box will not be lost, unlike those found in the bank, and can be collected any time the player visits the Financial Wizard at almost any bank in a low risk zone.

The Hitpoints skill can be separately insured by talking to Gelin in the Lumbridge graveyard. In order to get the insurance, a player must pay a fee. After paying the fee, a player's Hitpoints level will never fall below it when they die.

The Rules of RuneScape apply to Deadman mode as well.

Account sharing is bannable, and will cause players to be disqualified.

Boxing, which is engaging in combat with an allied player for the purpose of avoiding legitimate gameplay, will result in disqualification.