Death's Office, also known as Death's Domain, is a small office in which Death resides. The entrance to Death's Office can be found near any major respawn point, indicated by a tombstone icon

In Death's office, players can collect items that they did not collect from their grave within 15 minutes of dying. Items worth less than 100,000 are free to reclaim, but items worth more come with a 5% reclamation fee, while graves have a 1% reclamation fee. As with graves, ironmen (with the exception of ultimate ironmen) are given a 50% discount, giving them a 2.5% and 0.5% reclamation fee respectively. Items may be collected at Death's office before the 15 minute time has run out, although the cost is still higher.

Players may deposit unwanted items into the Death's coffer for 105% of the item's Grand Exchange price (item has to be worth more than 10,000 gp to be acceptable), which will be used to pay for item reclamation fees. Items offered here cannot be withdrawn and the value cannot be used for any other purpose.

Death can be talked to in order to cosmetically enhance the player's gravestone to a statue of an angel, costing 200,000. 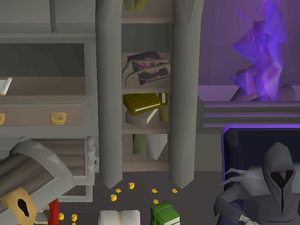