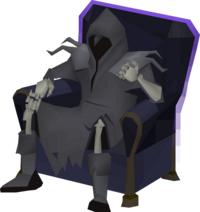 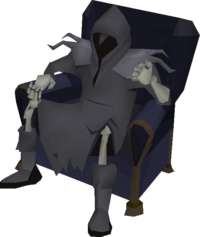 He has been the main figure of many Halloween events: he plays a part in the 2014, 2015, 2017 and 2021 Halloween events. An aspect of him appears all over the world when players die during the Halloween weeks.

Death volunteers to be the spooky companion that the player advertised for in order to scare Oziach from purchasing the Edgeville Monastery. However, the player decides to take Iffie instead. After the player and Iffie fail to scare off Oziach, Death unexpectedly appears and unintentionally scares away Oziach, oblivious to the fact the player and Iffie are hiding behind a tree nearby.