Death Plateau is a short quest wherein you are to help the Burthorpe Imperial Guard gain access to the Death Plateau in order to defeat the hostile trolls.

{"requirements":"None","desc":"Trolls have come down from the north and are camped on Death Plateau. They are using this base to launch attacks on the principality of Burthorpe!\nThe Imperial Guard is taking heavy losses. They need your help!","difficulty":"Novice","kills":"None","name":"Death Plateau","start":"Talk to [[Denulth]] in his tent in [[Burthorpe]]. Tell him you will discover the path for him.","length":"Short","ironman":"[[File:Ultimate ironman chat badge.png]] Players need 21 empty inventory spaces to deliver items to Tenzing.","items":"* 60 [[coins]] (bring more for the gambling dice with Harold part)\n*10 unnoted [[bread]]\n*10 unnoted cooked [[trout]]\n*[[Iron bar]]\n*[[Asgarnian ale]] (can be found on the bar at the pub in [[Burthorpe]])"}

Head to Denulth, who is located in a tent directly south-east of the Warriors' Guild in Burthorpe, or south of the Burthorpe Games Room. He tells you trolls have taken over the Death Plateau and are using it to launch nightly raids. However, they cannot reclaim the camp because the main path is heavily guarded by trolls. It has now become your job to find a different path to the Death Plateau. You also have to open the equipment storage room, which requires a combination code.

Talk to Eohric on the top floor of Burthorpe Castle. He will tell you that the guard on duty, Harold, is at The Toad and Chicken pub in Burthorpe. Go to the pub south-east of the castle, and head upstairs and to the west to find him. Try and speak to Harold, but he doesn't want to talk about the combination.

Go back and talk to Eohric. He will tell you that a beer and gambling may help to make Harold get over of his guilt. Players MUST speak to Eohric before proceeding to give the beer to Harold, otherwise the quest will not progress. 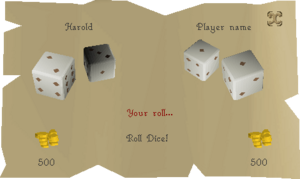 Buy him an Asgarnian ale, or get one from the table downstairs, and try talking to him again. This time, he will tell you he lost the combination and that he has searched for it everywhere without any success.

Note: You can ask Harold if he would like another drink and hand over a Blurberry special or Premade blurb' sp., which makes Harold drunk and unable to count. This allows you to automatically win all the dice games as Harold believes you are using all four dice.

Now, ask him if he wants to gamble. Make sure you have a relatively large stack of coins; you have to continue winning the bets until Harold is out of money, and you may lose a few times. Keep trying to beat him until you get an IOU (you will only get an IOU betting in amounts between 60-1000gp). A somewhat safe method to empty his pockets is to start betting at 101 and then double your bet every loss while going back to 100 after every win. This effectively gives you four chances to win each 100 coin bet. Once you get the IOU, read it to find that the combination code to the storage room is on the back of the IOU! The IOU will vanish from your inventory and be replaced with the Combination. Note: You'll need it at the end but you can get a new IOU (or Combination, depending if you've completed the dialogue from reading the IOU) from Harold if you've lost it. 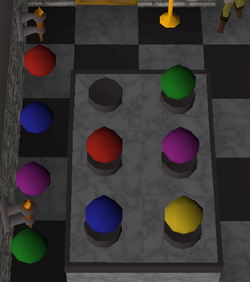 Combination code to the storage room.

Head back to the castle, and you'll see some coloured stone balls on the ground. Pick up the five stones (one of each colour; the yellow ball is just south of the green ball), and place them in this order with the map facing north:

If you place the balls before reading the IOU/Combination, the door will not open. In this case, pick up one of the balls (Green is closest to door) and replace it after reading the Combination.

The map of Death Plateau.

Walk out of the castle and head north-west, up the path towards Death Plateau to find a cave. Go in and talk to Saba. Ask if he knows of another path to the Death Plateau. The guy has a very rude and grumpy demeanour that may put off anybody, but he hates trolls as much as those who disturb him, so he will negotiate with you. He proceeds to share with you a secret path from a certain Sherpa's house, which leads directly to the Death Plateau.

Exit Saba's cave and continue heading west along the path until the path splits into a fork north and south. A wounded soldier marks the dangerous route towards the north. Warning: If you head north, a warning sign will tell you that Death Plateau is dangerous and you will be attacked by trolls. Do not go this way! Head back south-west. Follow the southern path and enter the house; inside you will find the Sherpa Tenzing. Talk to Tenzing and ask for his help. He will help you in return for 10 loaves of bread, and 10 cooked trout. He will hand you some Climbing boots. Warning: If your inventory is full, the climbing boots will not go into your inventory and Tenzing may not sell you another pair.

Take the climbing boots to Dunstan in north-east Burthorpe (marked by an anvil on the mini-map, north-east of the castle) to get them changed into spiked boots. He tells you that he will make you the boots under one condition: His son should be made into an Imperial Guard. He also requires an iron bar to make the spiked boots.

After talking to Dunstan, head back to the tent where you started the quest, and talk to Denulth, and tell him that you have found a new path. However, it will only be revealed under the condition that the Sherpa has spiked boots and Dunstan's son be put into the Imperial Guard. Denulth makes an exception and gives you a certificate to accept Dunstan's son into the Imperial troops. Go back to Dunstan, and speak with him to hand over the iron bar and the certificate to receive a pair of spiked boots.

Note: If you already have a pair of spiked boots in your bank, Dunstan will not make you another pair and just say "Sorry, I can't do anything with that" when you try to give him an iron bar, he will also hint that you already own a pair.

Into the mountains[edit | edit source]

Go back to Tenzing and give him his supplies. The bread and trout must be un-noted!

Note: You must give him the 21 items in one go. Trout can be bought in the Warriors' Guild.

Tenzing gives you a map of the secret area. You need to check the path before telling Denulth about it. Exit Tenzing's house out the side door to his backyard and climb over the stile. Take the path north and then continue following it east. Keep walking until you pass the second Mountain Goat and the rocks shortcut (don't try to climb the rocks). You may get a popup message saying that you'll be assailed by trolls if you continue while walking along the secret path. Ignore it, as the trolls will only attack if you're on the normal path. Just keep walking east until you get the message that it's safe to tell Denulth about the secret path. Return to Denulth with the Combination and secret map in your inventory to complete the quest. Note: You can get a new Combination (formerly IOU) from Harold if you've lost it. 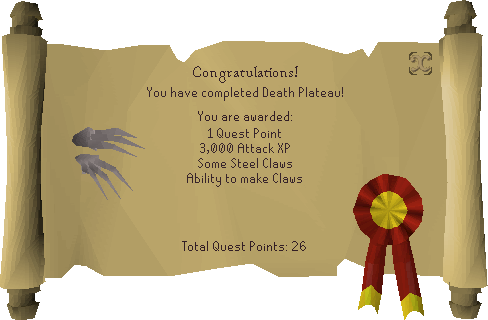 Completion of Death Plateau is required for the following: