The Death Plateau is a tall, flat land formation, surrounded by steep ascents, north-west of Burthorpe and directly north of the Warriors' Guild. This area is inhabited by various trolls. The plateau is NOT a multi-combat area, however the path leading around the plateau is riddled with thrower trolls and is multi-combat. Extreme caution is advised here, and players should take advantage of Protection prayers as certain monsters can hit very high here.

A Dwarf multicannon may be used here.

The easiest way to get to Death Plateau is by using a Games necklace or Grouping teleport, teleporting to the Burthorpe Games Room and walking north-west along the path. One can also use a combat bracelet to teleport to the Warriors' Guild.

Note that you will need climbing boots to pass the various rock obstacles on some paths.

The plateau plays a part in a few quests:

The Plateau is occupied by Mountain trolls of various levels, which can be attacked from safe spots. 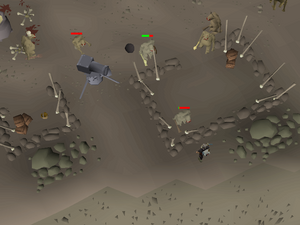