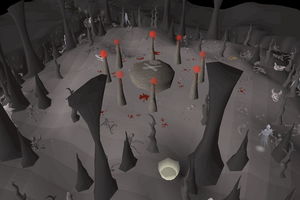 Inside the Death altar. 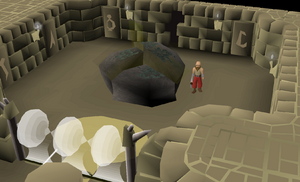 Outside the Death altar.

The Death altar is a runecrafting altar accessible after finding Thorgel at the end of the Temple of Light during Mourning's End Part II. It is located within the Temple of Light and is used to craft death runes from pure essence, granting 10 Runecraft experience.

As with most runecrafting altars, it can be accessed via the Abyss after completion of the quest. Players must have either a death talisman (obtainable from quest) or be wearing a death tiara, unless you are accessing it via the Abyss.

As the altar is one of the least-accessible in terms of distance from a bank, it's recommended to take the abyss route in order to craft a large amount of runes.

Entering the ruins by walking requires entering the Temple of Light and using the following directions.

Note: When leaving, remember to rotate the mirror again for future visits.

Alternatively, after Mourning's End Part II, the death altar can be entered from the dwarven camp in the Underground Pass. This is also a way to enter this area if you have forgotten to rotate the mirror when exiting through the ruins.

A death tiara may be created at this altar by having a death talisman and a normal tiara in your inventory. The player must use the tiara on the altar. Doing so gives 50 Runecraft experience.