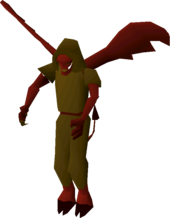 Death spawns may be summoned when players are fighting nechryael or their greater variant; when attacked, they may summon up to two death spawns to help attack the player. While having an extremely low max hit of 2, they are able to hit through protection prayers. Unlike their summoners, death spawns have no Slayer requirement in order to be harmed.

Auto Retaliate does not trigger to attack them. Home teleports are also unaffected by the death spawns attacks. Despite this, they can still interrupt conversation with other NPCs or other dialogue screens, such as teleport options when operating a piece of equipment.

Players who use Guthan's equipment may prefer to heal on death spawns rather than nechyraels due to their lower combat stats.

After being summoned by a nechryael, the death spawn will despawn after 1 minute.

Death spawns are demons, however, the effects of demonbane weapons do not affect them.

Death spawns do not impact players attempting to logout; one or several can be attacking a player without retaliation and at any point in time the player can logout without the game requiring a 10 second cooldown.