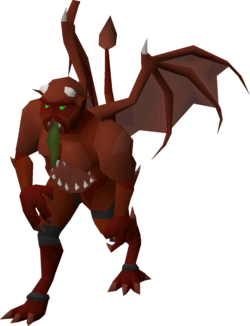 The Demon of Darkness was a Zamorakian demon who had to be defeated in order to obtain a demon's heart for Kolodion's spell during The Mage Arena II miniquest. In order to summon it, players had to use an enchanted symbol to locate it, similar to using an enchanted key or strange device.

It was replaced by Porazdir on an update on February 8th 2018.

It was recommended to keep Protect from Magic active during the entire fight. Even though it was able to hit through it, the damage players take would be halved. If players were assigned a black demon for their Slayer task, wearing a slayer helmet (i) was recommended, as the player's attacks would be more accurate.

The demon could only be harmed by the Flames of Zamorak spell or the twisted bow. As such, a Zamorak staff, staff of the dead or its toxic counterpart was required to defeat it if using magic.