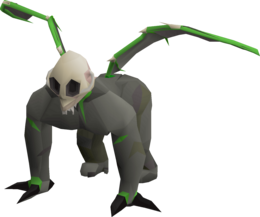 Demonic gorillas are powerful creatures found in the Crash Site Cavern. Two of them are fought during Monkey Madness II, in the penultimate stage of the fight. After the quest is completed, more demonic gorillas can be found in the caverns alongside their tortured brethren. They are primarily killed for their zenyte shard and ballista component drops.

Demonic gorillas use all three combat styles to attack. They will change combat styles after missing three hits in that attack style. They are also capable of using protection prayers, and will switch to protect from the player's attack style after taking 50 damage from it. Therefore, players must bring at least two different combat styles to kill them. As they have very high magical defence, they are most often killed with melee and ranged.

The gorillas also have a special attack where they send a rock crashing down at the player's position, which can be easily avoided by moving one tile away from the current spot when the attack was initiated. If struck by this rock, the player will take 33% of their current health as damage; it cannot kill the player by itself as a result.

Demonic gorillas count as monkeys and black demons for the progression of Slayer tasks. As they are demons, they are susceptible to the effects of demonbane weapons. Demonic gorillas cannot be damaged with a Dwarf multicannon.

Players can check the kill count by reading the gravestone next to Lumo at the opening in the fence.

Note: The prayers of the demonic gorilla cannot be bypassed through the use of Verac's set or special attacks.

The average demonic gorilla kill is worth 75,995, including the zenyte shard drop. Without zenyte shards, the average kill would only be worth 23,658.

There is a 5/500 chance of rolling the uniques sub-table.

There is a 25/500 chance of rolling the tree-herb seed drop table. This monster will always drop double the usual quantity from this table.

There is a 5/500 chance of rolling the rare drop table.