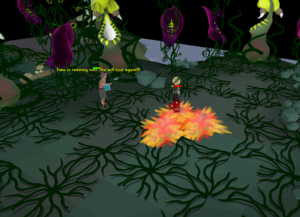 A player fights the Deranged archaeologist.

The Deranged archaeologist is a demi-boss located on Fossil Island. A simple mistake during the fight can cause instant death due to his special attack.

He attacks with both range and melee but will use only range if the player does not stand in melee distance. Although his Magic defence is quite high, his magic level is very low, so the most effective way to kill the archaeologist is to use Magic from several tiles away while Protecting from Missiles and avoiding his special attack. Note that the archaeologist can use melee attacks on tiles immediately diagonal to him.

If you have the Mycelium Transportation System unlocked and the House on the Hill teleport option unlocked on the Digsite pendant, teleport to the House on the Hill and take the Magic Mushtree to the Sticky Swamp. (Otherwise, get to Fossil Island via the Canal barge and run through the Swamp to reach the southernmost area.) Run south and cut the thick vine with your axe to clear a path. Continue south past the spined mushroom. If it attacks you, use a dose of your anti poison. Turn on Protect from Missiles and climb over the rotting log to begin the fight.

The 5x5 area where most secondary books will land (green), and the 9x9 area indicating the maximum distance for books to land (red). One book will always hit the central square and produce two more books.

The archaeologist will shout Learn to Read! and throw three orange books which explode on impact with the ground, four ticks (2.4 seconds) after he speaks. One book always hits exactly where the player was standing when the books were thrown. This book will burst into two additional books which also explode on impact.

The two other books from the initial attack, as well as the two additional books originating from the central book's impact, will typically hit somewhere in a 5x5 area surrounding the original location of the player. On rare occasions, some of these four books may hit up to a 9x9 area around the player's original location.

Each book's maximum hit, based on its impact location (the middle square).

The damage from the explosions ignores all defence (including armour bonuses[1]) and protection prayers. Each explosion deals maximum damage (up to 56[2]) on the tile where it impacts, but it will deal reduced damage (up to 18[3]) to all immediately adjacent tiles.

It is impossible for two books to target the same square. This means the maximum possible damage taken from the three initial books is 92: a direct hit for 56 plus twice 18 from the two indirect hits on surrounding tiles. The two subsequent books originating in the central square could then deal an additional 74 damage, again through one direct hit and one indirect hit. Do note that this series of events is highly unlikely, not only requiring all books to land in the most unfortunate locations, but also requiring the player to stand still and the books to all deal their maximum damage.

The attack has a 25-tick (15 second) internal cooldown and has a 1/3rd chance to be used instead of a normal attack.[3] He can use this as his first attack against players initiating a fight.

Note: The attack will deal damage on impact even if the archaeologist dies before the books explode.

A strategy to avoid all damage from the special attack is to run on a straight line out of the 9x9 area centered around your initial position as soon as the text Learn to Read! appears over the archaeologist's head.

If the player begins moving on the first tick after the text appears, running in a straight line will take the player 8 tiles away from the centre book's target by the time the books detonate, which avoids all damage. If movement begins one tick later, the player can still take damage, since they will be on the edge of the 9x9 area when the books detonate. In this case it is technically possible to take up to 74 damage (by receiving one direct and one indirect hit), but the odds of this happening are extremely small.

Players who have especially good reflexes can try to predict the books' impact locations and dodge them by running to a safe tile within the 9x9 area, but this is not recommended. Even if successful, the player can be subsequently hit by the secondary books which burst from the centre.

If maximizing kills per hour is not your objective, prioritize prayer bonus over magic attack bonus, since the archaeologist's low magic level makes him very easy to hit in spite of his high magic defence.