From Old School RuneScape Wiki
Jump to navigation Jump to search
This article is about the Guthixian ent. For the elf, see Derwen (elf).

Derwen is an ancient servant of Guthix, who takes great interest in Justiciar Zachariah and Porazdir, attempting to keep a balance between them.[1] He has to be defeated in order to obtain the ent's roots for Kolodion's spell during Mage Arena II miniquest. In order to summon him, players have to use an enchanted symbol to locate him, similar to using an enchanted key or strange device. 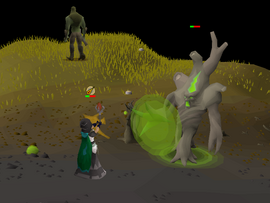 When fighting Derwen, he can use a special attack which will release multiple balls of energy in the area around him. These balls of energy will heal Derwen for five Hitpoints every few seconds. They can be destroyed by the player, having 20 hitpoints each. He can also teleblock the player for one minute.

Derwen can only be harmed by the Claws of Guthix spell. As such, a Guthix staff, a staff of balance, or the void knight mace is required to defeat him. Despite being referred to as an ent, killing Derwen will not count towards an ent slayer task from Krystillia.