The Desert Mining Camp is a slave camp located south of Al-Kharid in the Kharidian Desert. It features prominently in The Tourist Trap quest.

The camp can be reached by walking south from Shantay Pass.

Alternative routes to the camp include:

When travelling the desert to the camp, players are advised to bring a water source such as waterskins to avoid the effects of desert heat. Once inside the camp (including the underground mines), water is not needed.

A gate and troop of mercenaries bar the entrance to the camp. Entering the camp requires the metal key, or metal key on the steel key ring, in the inventory. It is obtained in the Tourist Trap quest by fighting the Mercenary Captain.

Inside the camp is a camel cart, a winch, the entrance to the underground mines, and a building that is the headquarters of Captain Siad. Siad's office has a chest and bookcases. If the table Siad is sitting at is searched, a cell door key can be found, which opens the door to the prison cell on the ground floor and the metal key, if lost or discarded. If players are thrown in the cell and do not have the key, they can still escape by bending the bars on the window and climbing down rocks into the desert. All these items play a role in Tourist Trap.

After the quest, searching Siad's table will provide all three keys from the quest: the cell door key, the metal key, and the wrought iron key. Siad's headquarters contains spawns for a bowl of water, a beer, a jug of wine, and some papyrus.

Slaves work the surface mines, with level 45 guards watching them. Guards may attack players that have armour or weapons equipped. Slave robes seem to be included as well.

The surface mines have rocks containing:

Further mines can be accessed by going down the ladder in the camp. The mine is rich in both mithril and adamantite rocks, though there are not any nearby banks or furnaces, so it is not a practical place to mine.

More guards, female slaves, and male slaves are found throughout the mines. Rowdy slaves appear in two places and attempting to talk to them causes them to become aggressive to the player. Rowdy Slaves will drop a slave shirt, a slave robe, and slave boots, which can be used to access the deeper parts of the mines.

Most of the ore rocks in the mines cannot be mined (have no ore present), except for ones in the very deepest parts of the mine.

The underground mines have rocks containing: 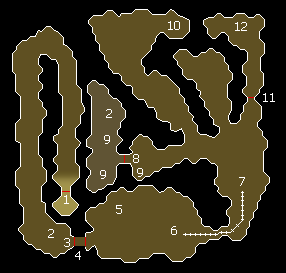 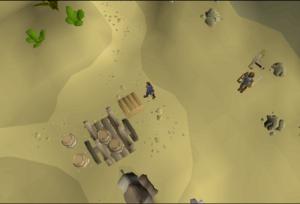 A player searching the crates for a cryptic clue.