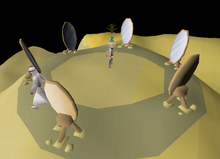 The mirrors, made by Eblis.

Collect the 4 diamonds, they may be obtained in any order.

Note: At any point with one of the diamonds in your inventory, a level 95 stranger may randomly appear and attack you with a poisoned dragon dagger. You may place the diamonds in the pyramid or your bank at any point to avoid this.

Note: You must wear ice gloves to wield anything while fighting Fareed (you can use ranged without ice gloves if you keep your distance, but all arrows are turned to ash as they hit). If using magic, only water spells can damage him (Trident of the Seas will not work). Be ready to run nonstop - the torches each have a timer.

A map of the Smoke Dungeon.

Items required: 20+ lockpicks, antipoison, food, 5,000 coins, magic combat equipment, Prayer/Super Restores to combat the Prayer drain. Note: Tiles by the general store in the Bandit camp will unnote any items for a small fee, and nearby bandits can be pickpocketed for anti-poisons and lockpicks. 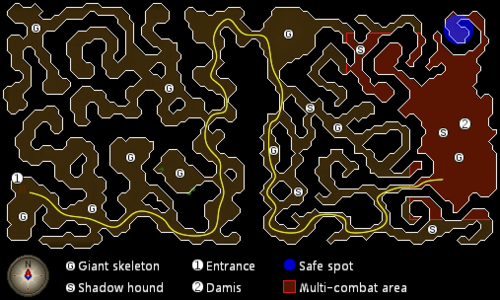 Items required: runes to cast fire spells to unfreeze the Trolls after killing Kamil, cake/chocolate cake, spiked boots (get these from Dunstan with a pair of climbing boots and an iron bar), climbing boots, food and combat equipment. Prayer and restore/super restore potions highly recommended.

After reaching Trollheim, the Ice Path is due north-west.

Note: Only fire spells will work if using Magic on Kamil. Iban Blast, Flames of Zamorak, and trident of the seas' built in spell cannot damage Kamil. Additionally, your stats will be constantly drained during this fight; keep this in mind when selecting the fire spell you will use. Note you cannot run in the area, so there's no point in bringing graceful set.

Tip: Use a ring of dueling to teleport to Ferox Enclave and use the pools to restore all your combat stats and prayer before proceeding. 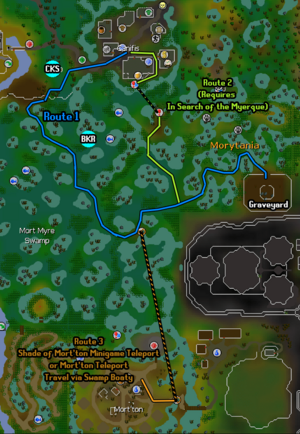 Reaching Dessous in the Morytania Graveyard.

Recommended: Consider bringing your Druid pouch to prevent ghasts from rotting your food as you run through the swamp