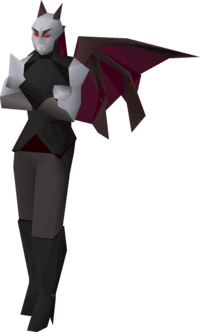 Desmodus Lasiurus is a vampyre found in the western area of Darkmeyer. He guards the Arboretum from all as per House Drakan's orders, but he doesn't appear to enjoy his job.

During Sins of the Father, it is revealed that Vanstrom Klause owed him a favour, which in turn allowed him to claim Gadderanks' wife and son, Maria Gadderanks and Ron Gadderanks. He had sent a juvinate, Mordan Nikazsi, to collect the slaves for him, but unbeknowest to him, he sold them to Lord Alexei Jovkai instead. He then tasks the player with finding his slaves in return for access to the Arboretum.

Although he is not a noble, he appears to have some standing in Darkmeyer, wanting to have Mordan killed upon learning from the player that the juvinate sold his slaves to Alexei.