Dessous, the Harvester of Blood, is a vampyre lord who owns some territory north of Castle Drakan. He must be killed during the Desert Treasure quest. The player is told of Dessous by Malak, one of the four guardians of the Diamonds of Azzanadra, who wants him dead in order to claim Dessous's land as his own. In order to achieve this, Malak tells the player that Dessous guards the diamond and if they wish to retrieve it they must eliminate him; it is when the player encounters Malak after the fight that he confesses that he is the real guardian and that Dessous was just an enemy of his, and then gives the diamond to the player as a reward for their troubles. According to Malak, Dessous is ancient but weak for vampyre standards and indeed he describes him as a 'frail and decrepit example of our species.' 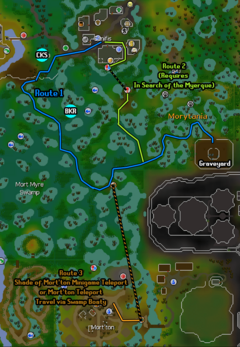 The routes to the Graveyard.

The Graveyard, in the south-east of Mort Myre Swamp.

To begin the fight, players must use a blessed silver pot containing blood, garlic and spice on his grave. Dessous uses two attacks: a rapid melee attack (3 ticks, or the same speed as the event rpg and swift blade) which is accurate and can hit up to 19, and a bat attack indicated by bats flying towards the player, with Dessous saying "Hssssssssssss", which is half Magic, half Ranged, each inflicting 5 hitpoints for a total of 10 hitpoints. The delay in which this attack hits the player seems to be random.

Dessous will detect a player's protection prayers and switch attack style accordingly. Players who will not be wearing melee Barrows armour are advised to activate Protect from Melee, otherwise players who are should use Protect from Magic/Protect from Missiles so that he will only use melee. A flaw in Dessous' mechanics can be taken advantage of so he will not be able to attack the player by switching between Protect from Melee and Ranged every tick (100 beats per minute if using a metronome), causing him to teleport around but not attack (if done correctly).

If players try to hit Dessous from a long distance away, he will teleport next to them, and if Dessous teleports three times he will get "bored of toying with you" and go back to his grave (this means the player will have to refill the silver pot and start the fight again).

Dessous is weak to Magic and Ranged, then Stab. Iban Blast and Trident of the seas/swamp are also effective.

If any part of the quest is not followed correctly (for example, if the pot is not blessed), Dessous will say "You will never defeat me" when reduced to 0 hitpoints and regenerate all his hitpoints, ready to fight again, so be careful! To avoid this keep full concentration at all times while making the blessed pot of blood.