Diango is a merchant located in Draynor Village who sells toys and other commemorative items in his store, Diango's Toy Store. He is able to replace lost holiday items that the player has previously earned from holiday events.

He was originally added to RuneScape as part of an April Fools' joke. Players had been requesting horses in the game for some time, and were excited to find out that Diango was to be added to sell "horses" in his store. However, Diango actually sells toy horseys, which are not rideable and are mostly useless. He has since been a part of several holiday events, such as the 2013 Halloween event.

Speaking to Diango will allow players to claim a banana hat, a cosmetic hat that was chosen from the winning entry of the Design A Hat competition. 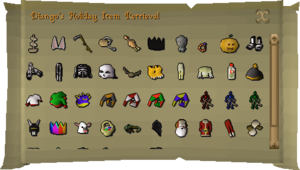