The Digsite is an archaeological excavation area just east of Varrock. Players need to proceed far enough into the Dig Site quest in order to fully use it. This area is a members-only location. It is visited during several quests:

During the Dig Site quest, players learn that the area was once Senntisten, the capital of the Zarosian Empire during the Second Age. During the quest, players find an ancient talisman and a stone tablet telling all mortals to tremble before the power of Zaros. This area is said to be part of a city three times bigger than Varrock which supposedly reached to Edgeville (then known as Paddewwa). It was destroyed during the God Wars and replaced by Saranthium, which was destroyed several hundred years before Avarrocka was established in 700 of the Fourth Age.

For players who are doing or have completed The Dig Site quest, the north-west winch at the Digsite provides access to the Digsite Dungeon. A Rope must be used with the winch to enter the dungeon. 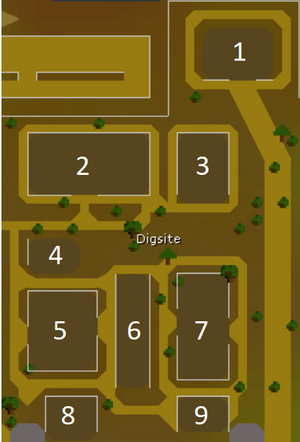 Players can dig at Digsite during and after the quest. Although the exam in the The Dig Site quest suggests that the player must be wearing leather gloves and Leather boots while having a rock pick, trowel, specimen jar, and specimen brush in the player's inventory to dig, this is not actually the case. Different site levels have different requirements as outlined below, and none actually require all 6 items.

There are 9 different sites where the player can participate in Archaeology, spread across 4 different categories of dig: Training, Level 1, Level 2, and Level 3. Each type of dig has its own requirements and table of possible finds.

Players can also pan at the south-east part of Digsite with a panning tray. In the south-east section of the Digsite, it is also possible to search the specimen tray with a specimen jar in the inventory.

For each type of archaeology, see the relevant main article linked at the top of this section for the possible rewards. 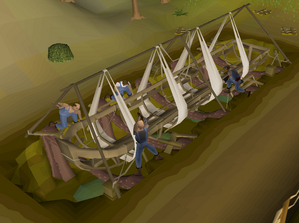 The canal barge, under construction.

After earning 100 kudos in the Varrock Museum, players will have access to Fossil Island, found north of Morytania. The barge to travel there is currently being built just north of the Digsite by Ed Wood, workmen, the barge foreman, and four barge workmen.