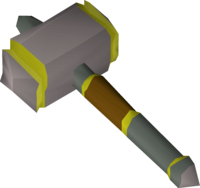 Dinh's hammer, a tool of the legendary smith.

Dinh was a legendary and renowned dwarven master smith from Lovakengj. He presumably lived during the Fourth Age before Xeric took power over Great Kourend. Dinh is described as the greatest smith of all time and some of his work still persists to this day. One of Dinh's greatest accomplishments was forging the Doors of Dinh, which were made to contain the Wintertodt and have lasted for centuries. Dinh resided in a remote tower of his own design named Dinh's Redoubt, today more commonly named the Forsaken Tower, on a small peninsula just west of Lovakengj. The tower was where Dinh made and stored some of his greatest creations such as Dinh's bulwark.

The tower was eventually raided by Xamphur and a group raiders on Xeric's order, who tarnished Dinh's legacy and stole most of his inventions and took them to Mount Quidamortem. Dinh's fabled hammer was recovered from the tower by an adventurer, who was sent to recover the hammer for the dwarven smith Undor, as it was considered the only tool capable of fixing the Doors of Dinh, who for the first time since their creation was starting to fail, supposedly due to sabotage.