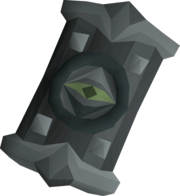 Dinh's bulwark is a two-handed shield created by Dinh, a Lovakengj smith of unparalleled skill. It requires 75 Attack and Defence to wield and is obtained as a rare reward from the Chambers of Xeric.

As the strongest shield in-game (barring any passive effects), it is often equipped alongside magically defensive armour (such as black dragonhide armour) while doing non-combat activities in the Wilderness to defend against player killing and/or dangerous monsters. As a two-handed shield, the bulwark is also capable of attacking opponents. In order to attack with the bulwark, it must be set to the pummel option. This also allows it to perform its special attack.

The animation upon equipping the bulwark.

Dinh's bulwark has two different passive effects depending on the combat style chosen: A strength bonus buff when in the Pummel style, and a damage reducing effect when in the Block style.

While the Pummel attack style is chosen, the player's strength bonus is increased based on the player's average defence bonus.

While the Block attack style is chosen, players lose the ability to attack, but incoming damage is reduced by 20% (except in PvP). There is an 8-tick (4.8 seconds) delay before the damage reduction applies after switching to the bulwark, to prevent players from equipping it on a defence tick and switching back to a more damaging weapon for the attack tick. Changing attack style from 'Block' attack style to the 'Pummel' attack style, will cause a 10-tick (6.0 seconds) delay when trying to attack.

Furthermore, players wielding the bulwark will not be able to cast any combat spells; players attempting to do so will receive the message "Your bulwark gets in the way". When in defensive mode, the dwarf multicannon will not fire, but it will still rotate, with a filterable message stating "Your bulwark shuns your cowardliness; stopping your cannon from firing."

Dinh's bulwark has a special attack, Shield Bash, which hits up to 10 enemies (in both PvM and PvP) in a 11×11 area around the player (thus up to five tiles away from the player) with 20% increased accuracy, consuming 50% of the player's special attack energy. The targeted monster gets hit twice by the attack, while all other monsters get hit once. These effects only occur in multicombat areas.

In addition, the target's highest offensive stat will be reduced by 5% on a successful hit. If all stats are equal, it will drain both Attack and Strength, then Ranged, or Magic.

This special attack is useful for players in a multicombat area to attack multiple monsters simultaneously to get their attention, such as for dust devils and greater nechryael in the Catacombs of Kourend; as the special attack is considered a melee attack against all affected monsters, it can be useful to use in tandem with the serpentine helm due to its passive chance to inflict venom on hit.