The disk of returning is an item previously obtained by completing a midsummer ritual during midsummer events. It has since been added to Diango's Toy Store.

Activating it requires the player to be inside the Dwarven Mine, and when activated the player is teleported into the Blackhole, where Thordur resides. To leave, simply activate the disk again. This will cause players to reappear in the Dwarven Mine, next to Boot and the sign in the north-western corner of the mine. This means it could conceivably be used to quickly travel from the south-eastern part of the mine to the north-western part. This can be useful for Free-to-play Ultimate Ironmen to train their Smithing with Superheat Item in the mines, by accessing the anvils next to the respawn location after leaving the blackhole. 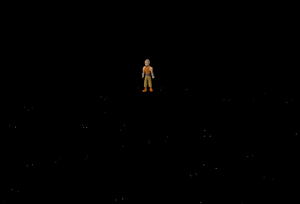 A player inside Thordur's blackhole.

Attempting to drop it while inside the blackhole will result in a confirmation message asking, "Really drop your Disk of Returning?" Answering "Yes, something cool might happen" will give the message "That was disappointing". Occasionally, though, the chatbox message will state "Something cool happens" as the player performs the dance and clap emotes. This interaction is a reference to a scam that frequently occurred in RuneScape Classic, where visitors of the blackhole were told "something interesting would happen" if they dropped their disk of returning, resulting in a significant number of unoffending players getting stuck inside.

Note: You can still get out of both holes after dropping the disk of returning, either by talking to Thordur and asking how to get out, or by exiting through the light in the blacker blackhole. Any items dropped on the ground in either hole will be deleted upon leaving.