Don't Know What is a troll found in the troll town of Weiss, and is Mother's bodyguard. During Making Friends with My Arm, he was the next in line to rule Weiss and marry Snowflake. However, after the events of the quest, he is defeated and now takes over Boulder's role as the gatekeeper.

He is capable of ranged and melee attacks. His ranged attack can sometimes hit through protection prayers, so caution is advised when fighting him. 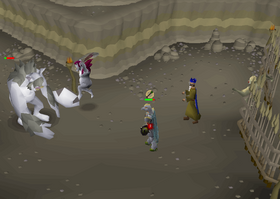 The player, My Arm, Snowflake and the Wise Old Man fight Don't Know What.