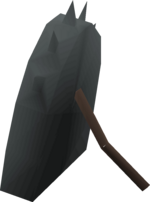 Door-support are NPC barricades blocking the player from going further into the Waterbirth Island Dungeon. There are three door-supports, accessible by each of the three paths. The props can be knocked down with either Magic or Ranged.

Upon entering, two eggs will immediately hatch dagannoth spawns, who will attack with melee. Monsters from the other rooms may also enter through the now open doors to attack with melee, ranged or magic.