The Dorgeshuun crossbow is a crossbow that is often used to train Ranged due to the fact that its ammunition is cheap and powerful, and it has stats comparable to those of a yew shortbow or an iron crossbow while being one-handed, allowing the use of a shield slot item such as a god book or anti-dragon shield. It has an attack range of 6 increased to 8 with longrange.

It requires a Ranged level of 28 to wield.

It can be bought from Nardok in the Dorgeshuun Mines after the completion of The Lost Tribe quest (though the quest does NOT need to be completed in order to equip it). It can fire bolts up to iron (excluding silver bolts, leaving it with only bronze, iron, and blurite bolts and their unenchanted gem-tipped versions) and is the only crossbow that can use bone bolts. 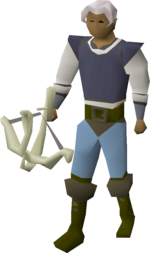 The Dorgeshuun crossbow has a special attack, Snipe, (75%) which will never miss as long as you weren't the last one to attack the target[1], and lowers the target's Defence by the amount of damage dealt, similar to the Bandos godsword's and bone dagger's special attacks. (Note that while the special attack skips the accuracy roll, it is still possible to "hit" a 0 on a successful attack.)

The special attack requires completion of the quest Death to the Dorgeshuun.