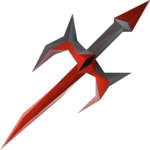 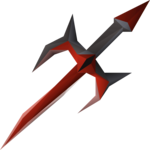 The dragon defender is the second strongest defender in Old School RuneScape, behind the Avernic defender. It is used for its attack and strength bonus and is held in the shield slot. It requires level 60 Defence to equip.

A player must show a rune defender to Lorelai once to gain permanent access to the cyclopes in the basement. Players can obtain a dragon defender without having a rune defender in their bank.

Its defensive bonuses are comparable to those of an adamant square shield, with slight differences. Its strength bonus is surpassed by both the dragonfire shield and the Avernic defender, which give +7 and +8 strength bonuses, respectively. However, the dragon defender is more commonly used than either of these for melee training, due to its superior melee attack bonuses over the dragonfire shield and the overall rarity of the Avernic defender.

The dragon defender is the item Falo requires players to show him when he sings about: A sword held in the other hand, red its colour, Cyclops strength you must withstand.

Defenders are only dropped by cyclopes found within the Warriors' Guild.

This item is only dropped from the level 106 variant.

Players can upgrade a dragon defender by attaching an Avernic defender hilt to it, creating the Avernic defender, which requires an Attack and Defence level of 70 and has increased bonuses. This process can be reversed, but the hilt will be destroyed in the process.