From Old School RuneScape Wiki
Jump to navigation Jump to search
Not to be confused with Dragon crossbow. 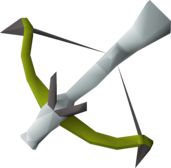 The dragon hunter crossbow is a dragonbane weapon obtained as a possible reward from the Chambers of Xeric, requiring 70 Ranged to wield. Long kebbit bolts and kebbit bolts cannot be used with this weapon, unlike the similarly named hunters' crossbow that can fire them. Broad bolts may be used if the player has their requirement of 55 Slayer. The crossbow has an attack range of 7, and the longrange combat style will increase it by 2.

The dragon hunter crossbow possesses a passive effect that increases ranged accuracy by 30% and damage by 25% when fighting draconic creatures, such as dragons and wyverns. However, Elvarg and revenant dragons are not affected by this bonus. This stacks multiplicatively with Void Knight equipment, salve amulets, and the slayer helm (i).[1]