The dragon hunter lance is a one-handed dragonbane weapon created by using a hydra claw on a Zamorakian hasta. Equipping the lance requires level 70 Attack as well as completion of the firemaking (not the pyre step), fishing and smithing sections of Barbarian Training. In addition, the smithing section requires completion of the Tai Bwo Wannai Trio quest. As it is created from a Zamorakian hasta, it will act as a Zamorak item within the God Wars Dungeon.

The lance increases both accuracy and damage by 20% when fighting dragons (excluding Elvarg and revenant dragons) and other draconic creatures, such as wyverns and the Great Olm. This stacks multiplicatively with both Void Knight equipment and the Slayer helm (i).[1] However, it loses its defensive and prayer bonuses and some of its strength bonus compared to the Zamorakian hasta. Unlike the Zamorakian hasta, the Dragon hunter lance does not have a special attack.

When attempting to create the dragon hunter lance, a warning will appear in the chatbox stating that the process cannot be reversed, and a confirmation will appear afterwards asking if players would like to proceed with the alchemical combination. Should the player confirm, the chatbox will state You successfully combine the Hydra claw and the Zamorakian hasta to create the Dragon hunter lance.

For a list of enemies vulnerable to the effects of the Dragon hunter lance, see the Dragonbane weapons page. 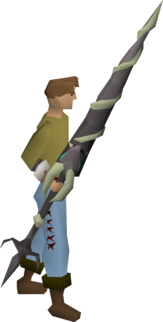