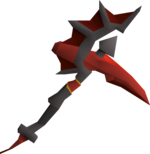 The shard gives no additional bonuses, and is only used to add aesthetics to the pickaxe. It costs 5,375,001 for both the parts to make the dragon pickaxe (or).

While the pickaxe is untradeable in its ornamented state, it can be reverted anytime, returning the dragon pickaxe and Zalcano shard.