The dragonfire shield is an upgraded Anti-dragon shield, and widely considered one of the best shields in the game, after the Elysian spirit shield and Dinh's bulwark. A Defence level of at least 75 is required in order to wear it, as well as having started Dragon Slayer.

The shield offers two special characteristics: it acts like a regular anti-dragon shield in terms of dragonfire protection, and it also protects against the icy breath of wyverns, similar to the dragonfire ward, elemental, mind and ancient wyvern shields.

The dragonfire shield is unique in terms of Defence it gives. When uncharged, it is tradeable and offers slightly more defences than a mithril sq shield. However, when fully charged, it is one of the best shields in the game.

To charge the shield, you will need to absorb dragonfire attacks while wearing it. Every absorption effectively increases its defences by +1, to a peak of a +50 Defence increase. However, its Magic Defence will remain the same.

The dragonfire shield is created by attaching a draconic visage to an anti-dragon shield at any anvil. The process requires 90 Smithing and a hammer, giving 2,000 Smithing experience and an uncharged dragonfire shield. Players who do not have the required Smithing level to make the shield can go to Oziach in Edgeville, who will smith the shield for any player at a cost of 1,250,000 coins. 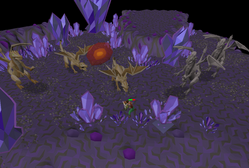 A player charging the dragonfire shield.

As it absorbs the dragonfire attacks of adult dragons, the dragonfire shield builds charges. The shield can also be charged by absorbing the breath attacks of wyverns, although it will still discharge dragonfire. Each breath attack gives the shield one charge, and each charge increases its Melee and Ranged defensive bonuses by +1. The shield can hold up to 50 charges, giving a total bonus of +50 to Melee and Ranged defences, in addition to the shield's base Defence bonuses. The Check option, while the shield is in the inventory, can be used to check its current number of charges. When fully charged, the dragonfire shield surpasses most shields in the game for Melee and Ranged Defence, although the crystal shield provides higher Ranged Defence.

The quickest and easiest way to charge an uncharged dragonfire shield is using a vial of powered bottled dragonbreath on it.

Other fast ways include being attacked by dragons rapidly. Metal dragons use only dragonfire when they are at a distance, making them optimal; iron and bronze dragons in Catacombs of Kourend are located in a multi-combat area, where charging a shield to full takes less than a minute. As long as the player is not in melee distance and they have used an antifire potion, they will take no damage from the process. Elvarg in a practice run of Nightmare Zone may also be used as a free and completely safe alternative.

During Combat, the dragonfire shield can expend one charge to unleash a blast of dragonfire at one target, which can hit approximately 25 damage. This attack can only be used once every two minutes, and each expended charge reduces the shield's Melee and Ranged defensive bonuses by one. Note: you do not have to use these attacks, as it does lower the shield's defensive bonuses for each attack. The dragonfire attack follows the standard rules for dragonfire; it will be less effective against a target that has resistance to dragonfire, such as a player that used an antifire potion and/or an anti-dragon shield or dragonfire shield. Furthermore, the dragonfire attack will not work against chromatic dragons, wyverns and some boss monsters, although metal dragons up to mithril are vulnerable to it.

A player emptying all charges.

The dragonfire attack can be used at range (up to 10 squares away) and over obstacles, after which the user will initiate a normal attack with their equipped weapon, if possible. The damage splat is rolled with accordance to the user's Defence level (and target's Magic Defence bonus - chance of being untrue). When used upon an NPC, Magic, Defence and HP experience is gained; however, when used upon another player, only Defence experience is gained.