A dragonfire shield is an upgraded anti-dragon shield, and one of the best shields in the game behind the elysian spirit shield and Dinh's bulwark. Equipping it requires 75 Defence and having started Dragon Slayer I. It retains the same dragonfire protection as the anti-dragon shield and it also protects against the icy breath of wyverns, like the dragonfire ward, elemental, mind, and ancient wyvern shields. 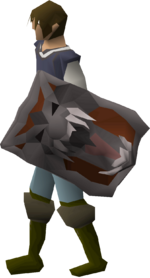 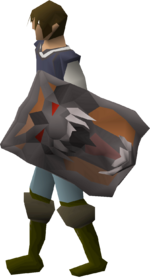 A player charging the dragonfire shield. 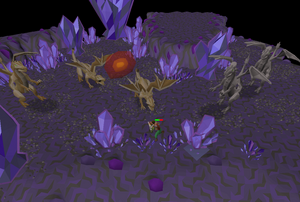 Up to a maximum of 50 charges, the shield will absorb one charge per adult dragon dragonfire attack and icy breath attack from wyverns, although it will still discharge dragonfire. Alternatively, it can be fully charged with one bottled dragonbreath used on it. Each charge increases its melee and Ranged defensive bonuses by 1, giving a maximum total bonus of +50 to melee and Ranged defensive bonuses on top of the shield's base defensive bonuses. Prior to getting all 50 charges, any dragonfire attack will cause the player to brace behind the shield, stalling the player from doing other actions, but not affecting attacks.

Quickly gaining charges requires a multi-combat zone with multiple metal dragons as they will always use dragonfire when at a distance. The best location for this is the iron and bronze dragons area in the Catacombs of Kourend. Avoid being in melee range and drink an antifire potion to avoid all damage from the dragons. Charging to full with this method will take less than a minute. Elvarg in a practice run of Nightmare Zone may also be used as a free and completely safe alternative.

The Check option, while the shield is in the inventory, can be used to check its current number of charges.

During Combat, right-click "activate" on the equipped dragonfire shield to expend one charge and unleash a blast of dragonfire at a target, hitting up to 25 damage. This attack has a cooldown of about 1 minute and 56 seconds [1], has a range of 10 tiles including over obstacles, after which the player will initiate a normal attack if possible. The damage is rolled with accordance to the player's Defence level and rolls against the opponent's Magic defence. Against NPCs Magic and HP experience is gained, however, against another player, only Defence experience is gained.

Each charge expended reduces the shield's melee and Ranged defensive bonuses by 1. The dragonfire attack follows the standard rules for dragonfire; it will be less effective against a target that has dragonfire protection, such as a player that used an antifire potion and/or an anti-dragon shield. Furthermore, the dragonfire attack will not work against chromatic dragons, wyverns, and some boss monsters, although metal dragons up to mithril are vulnerable to it.

A player emptying all charges.

A dragonfire shield can be drained of all charges at once by right-clicking the shield in the inventory and selecting Empty, releasing it all in a harmless burst. This is useful when selling or trading the shield, as it can only be traded when completely uncharged.