The Dragonkin Conflicts were a series of attacks by the Necrosyrtes, a group of Dragonkin who spread terror to cool their rage. The attacks started immediately after the God Wars and lasted for approximately a hundred years.

After the abuse of the Stone of Jas by Saradomin and Zamorak during the God Wars, the Dragonkin, unable to stop them, were tortured by Jas' curse and thus cooled their rage by attacking human settlements as the Fourth Age began.[1] Being largely resistant to conventional weapons, the Dragonkin were left unchecked.

As the conflicts escalated, humans found a way to harm the Dragonkin via weapons from Kethsi, and begun to turn the tide on the battle.[3] Seeing this, Zorgoth, a Dragonkin, began to perform experiments with other Dragonkin on dragons, who were bred from lizards infused with the lifeblood of Dragonkin. Their aim was to turn the tide of the war back in their favour, by creating dragons possessing greater strength and aggression by injecting them with spores from certain fungi.[4] The first of these experiments took place in a laboratory on Crandor, where they had succeeded in giving a green dragon heightened aggression after hundreds of trials.[5]

As their experiments continued, they had moved to a different laboratory, this time on Ungael.[6] Here, they had changed the test subjects from green dragons to blue dragons.[7] This resulted in the creation of at least two vorkath - they had increased strength, but were even less aggressive, most likely as a result of their undead nature. Zorgoth destroyed one of them in a rage during an unknown incident.[8] As the operation grew larger, he ordered the construction of the Lithkren Vault on Lithkren.[9] Eventually, human forces discovered the island, prompting Zorgoth to abandon the island, keeping the remaining vorkath there to serve as an obstacle.[10] 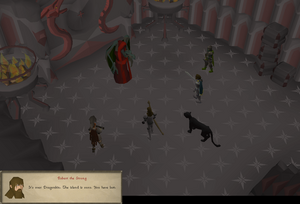 Aivas, Tristan, Odysseus, Robert the Strong, and Camorra confronting a dragonkin on Lithkren.

On Lithkren, their largest laboratory, they continued their experiments, abducting creatures such as demons, giants and spectres as well.[11] This eventually attracted the attention of heroes Robert the Strong, Aivas, Camorra Shayzien and Tristan Corvo after sailors spotted an island with Dragonkin architecture as they were forced to take different routes.[12] The four led an assault on the island, where they eventually encountered a Dragonkin by a set of grandiose doors. The Dragonkin was slain by the four heroes, but not before creature was able to kill Aivas.

This assault enacted the emergency protocol in the Vault, which placed it in lock-down, trapping Zorgoth within.[13]

Fearing what may lie behind the doors,[14] the heroes decided to split the dragon key that the dragonkin left behind, and hid the pieces around the world.[15] Robert hid two key pieces in Ungael and the Karamjan Temple in the Kharazi Jungle, Tristan buried one key piece in Mort Myre Swamp, and Camorra travelled far west to Zeah, eventually founding Shayzien.[16] After her death, she hid her key piece in her coffin in the lowest level of the Shayzien Crypts.

Robert fights against a dragonkin.

After the battle on Lithkren, the conflict between the Dragonkin and humans continued. At one point in the war, Robert and his panther, Odysseus, managed to reach Dragonkin Castle and confront another Dragonkin. During the fight that ensued, Odysseus was killed by the Dragonkin. Robert nearly died as well, but he ultimately managed to kill the wounded Dragonkin.

The conflicts between the Dragonkin and humans eventually ended sometime after this battle. 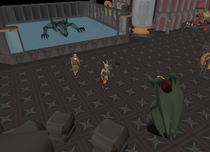 Zorgoth is released from the Vault after nearly two thousand years.

During the Fifth Age two thousand years later, an adventurer and Dallas Jones, an expert on dragons, unwittingly opened the Lithkren Vault, whose key was split by the Fourth Age heroes long ago, and freed Zorgoth.

During his imprisonment, he had managed to perfect the ultimate weapon. The weapon was Galvek, a dragon with elemental powers and the ability to control the minds of other dragons.[17] With the Vault unsealed, Zorgoth left the vault, after killing Dallas, and began to gather the world's dragons to Ungael in order to launch an assault on the human kingdoms. 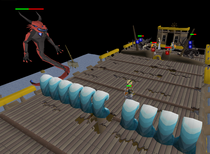 Seeing the threat that Zorgoth posed to the world, the kingdoms of Gielinor, namely Asgarnia, Misthalin, Kandarin, as well as the Fremennik Province, Burthorpe, and Camelot, stood united against the dragonkin threat, and planned an assault on Ungael.

The assault was a success, resulting in the deaths of Galvek and Zorgoth, but not without many casualties from the united kingdoms, and Bob the Cat.