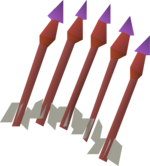 Enchanted dragonstone dragon bolts have a 6% chance of triggering the Dragon's breath effect. This inflicts a dragonfire hit against the target, causing extra damage (visible ranged level * 20%). If the player boosts to achieve a Ranged level of 112, the extra damage is 22. If the target is immune to dragonfire, the special effect will not activate.

Enchanted dragonstone bolts are notable because of their effectiveness in PVP, with a chance of hitting extremely hard against opponents without antifire protection. Some players may use Opal dragon bolts (e) instead due to having the same ranged strength bonus, and harder to nulify extra damage for a similar cost. A player with 99 Ranged and using the appropriate boosts (namely Rigour, the Elite Void Knight equipment set effect, and a Ranging potion) can achieve a max hit of 71 with the special in PvP scenarios, one higher than using the runite counterparts.

If the player has completed the Hard Kandarin Diary, there is a 10% increase of the likelihood that the special effect of an enchanted bolt will occur. This effect is always active regardless if the headgear is equipped. This would make a total of 6.6% chance to activate.