From Old School RuneScape Wiki
Jump to navigation Jump to search
This article is about the Slayer monster. For the superior variant, see Guardian Drake.
For other uses, see Drake (disambiguation).

Drakes are wingless dragons found in the middle level of the Karuulm Slayer Dungeon in Mount Karuulm, requiring level 84 Slayer to kill. As they are only found within the volcano, players must wear the boots of stone, boots of brimstone or granite boots to protect themselves from the extreme heat of the dungeon floor. Alternatively, players who have completed the elite Kourend & Kebos Diary can wear any type of footwear, or no footwear, without being rapidly burned.

Drakes were created as an experiment by a Dragonkin named Karuulm after his perceived failure of the wyrm project. Where wings would have grown, gaping sores are developed instead, causing constant pain to them. As a result, Drakes are very aggressive. 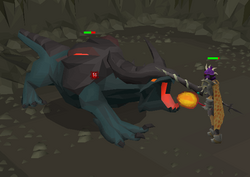 Drakes normal ranged attacks can be fully blocked by protect from missiles.

Drakes do not require a fire protection shield or potion to be slain, unlike most other dragons. However, after seven auto-attacks, drakes will launch a volcanic breath towards the player's current position, which deals 6-8 damage for four hits if the player is struck by the projectile.

Alternatively, moving one tile elsewhere when the projectile is launched allows complete avoidance.

Together, a player can take no damage when using protect from missiles and dragonfire protection while attacking at a distance.

Drop rates estimated based on 212,000 kills from the Drop Rate Project, unless otherwise cited.

There is a 5/85 chance of rolling the herb drop table. The drop table is rolled up to three times, giving various herbs. There is an equal chance of dropping 1, 2 or 3 herbs.

There is a 6/85 chance to get noted herbs. Only one herb type is dropped, but it has an equal chance of dropping 1, 2 or 3 herbs of the same type, for an average of 2 herbs.

There is a 1/85 chance of rolling the rare seed drop table.

There is a 1/85 chance of rolling the gem drop table.