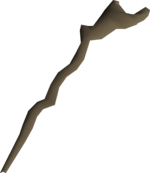 The dramen staff allows players to enter Zanaris from the shed in the Lumbridge Swamp after completion of the Lost City quest. Players can obtain the staff by using a knife on a dramen branch, which requires a Crafting level of 31. It is possible to return to Entrana and cut more branches from the Dramen tree, although it is advised players make multiple staves upon completion of the quest, as this prevents the need for a return trip should the staff be lost.

The dramen staff is required to use the fairy ring transport system, which requires partial completion of the Fairytale II - Cure a Queen quest. Players who have completed the Elite Lumbridge & Draynor Diary can use them without the staff.

During the Lunar Diplomacy quest, players upgrade their staff into a lunar staff, which has the same effects, and is always lost on death.

The dramen staff can also be used to defeat Koschei the Deathless during The Fremennik Trials quest by smuggling in a Dramen branch and a knife.